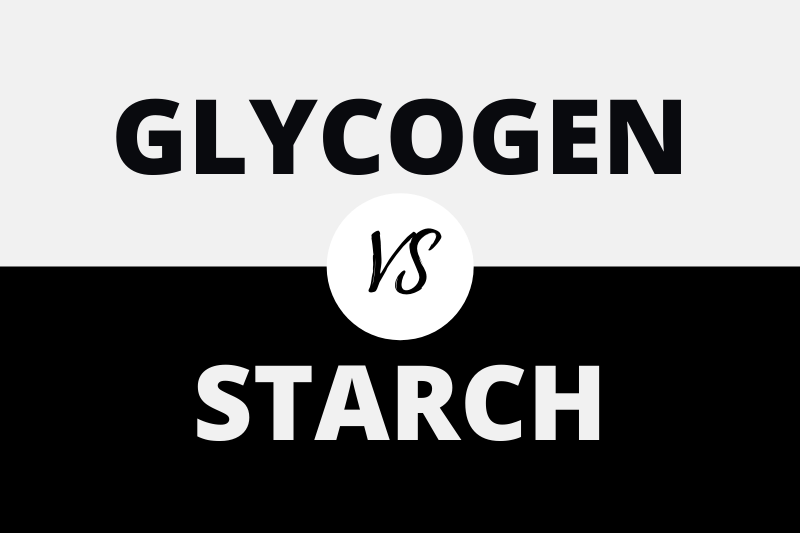 Before we dive into Glycogen vs Starch, let’s learn some basic chemistry.

Energy helps your body to keep going. Lack of energy in the body can cause weakness, fatigue and the organs won’t be able to function properly. You will fail to do the most basic things like walking and eating. Your body needs a substantial intake of glucose or sugar to meet the daily need for energy.

Glucose is the source of energy for the body cells. It can be obtained from starch. Starch can be found in both plants and animals. Even though our body parts like the liver, stomach, and muscles naturally produce the animal starch glycogen, we get the sugar from the starch that is produced by the plants.

During the formation of Glycogen, the monomer unit is Alpha Glucose. This is found as small granules present in the cytosol of the cell. Glycogen is stored in the liver cells and muscle cells of humans.

On the other hand, Starch is a necessary component of energy production in plants. The glucose that is produced by the plant will be converted to insoluble substances like starch and fats. You can find starch in the amyloplasts of plants and fruits.

The liver, muscles, brain, and in the case of a pregnant woman, the uterus and stomach produce the Glycogen. It is the secondary storage of energy present in the cells of animals. Often referred to as the animal starch, Glycogen helps with the storage of glucose which in turn ensures a steady supply of energy.

All the energy that is formed and reserved by Glycogen can be used up by the body. The Glycogen made in the liver is the component that is accessible by the organs of the body.

Multiple factors like physical health, basal metabolic rate, and diet affect the storage of Glycogen. This need for energy leads to the intake of starch.

Whenever the body is in need of energy, the Glycogen of the body is broken down into Glucose which provides us with the necessary energy. This whole process is called Glycogenolysis. With the help of the hormone called Glucagon, this process takes place.

Glycogen is stored in the adipose tissues of the body. Glycogen keeps the body ready for the exercises and actions that we perform throughout the day.

All the green plants produce a carbohydrate called starch. Plants have a huge number of glucose units that are used to store energy. Plants like potatoes, cassava, wheat, rice, and corn are full of starch. It is a necessary component for humans.

The molecule of starch contains 20-25% Amylase and 75-80% Amylopectin. Starch is processed to produce the most important ingredient for our body which is sugar. It is sometimes used as a stiffening or thickening agent.

People across the world have been using starch for centuries. Romans have been using it for their cosmetics, Egyptians used it for weaving and gluing papyrus and the Chinese used it to treat paper.

Starch is formed by the monomer called Alpha Glucose. Starch occurs in the form of granules in the cells of plants. These granules are known as Amyloplasts. The starch present in the plants is converted into cellulose. Cellulose helps with the production of energy, growth, and repair of the plant cells.

Do you know? Cream of Wheat Vs Grits

Difference Between Glycogen and Starch

Glycogen is the major component for fungi and animals. It is the polymeric carbohydrate of glucose. On the other hand, starch is the complex sugar of glucose that is found in plants.