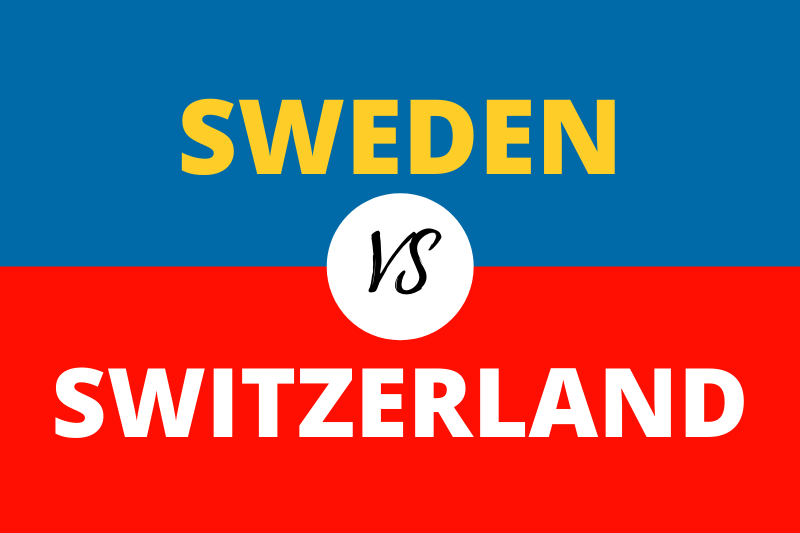 I don’t know about you but when I was a kid, I used to get confused with Sweden and Switzerland. With multiple similarities and distinctions, Switzerland and Sweden are not the same. Situated in the same continent, these two countries differ in their culture, landscape, geography, politics, and language.

In terms of size, Europe is considered to be the second-smallest continent after Australia. It consists of Eurasia which is a combination of Europe and Asia. About one-fifteenth of the total land area of the world is occupied by this continent.

The land of Europe is full of minerals and resources found in the sea, soil, and forests. There are multiple countries located in Europe. Switzerland and Sweden are two of the European countries which are often causing confusion among non-Europeans.

Some people think of these two locations as the same country. Many people tend to interchange the names or call both the nationalities as Swiss or Swede.

Sweden is located in Northern Europe. It is officially known as the Kingdom of Sweden. In the north and west, it is surrounded by Norway and in the east by Finland. In the southwest, it is connected to Denmark with the help of a bridge tunnel.

The country is mostly phallic in terms of appearance and forms a coastline with the help of the Baltic Sea and the Gulf of Bothnia.

There are multiple geographical features present in the country such as coastal islands, lakes, vast forests in the north, and the glaciated mountains. The capital city of Sweden is Stockholm which is built on fourteen islands. There are around 50 bridges around the country, beautiful museums, and royal palaces.

The people of Sweden speak Swedish. It is the primary language of the people. Pop culture is very famous here and music plays a crucial role in the country. With famous artists like ABBA, they have left a mark in the music industry.

Sweden is also known for its cars like Koenigsegg and Volvo. The prestigious Nobel prize is also based in Sweden. The country is based on parliamentary democracy where all the affairs of the government are looked after by the Prime Minister.

There seems to exist the Glass Ceiling Effect. This has actually the increased gender wage gap found in the wage distribution system. Even with substantial measures to control the differences in terms of age, education, and occupation; the gap continues to increase.

Sweden is one of the five Scandinavian or Nordic countries.

Switzerland is officially known as the Swiss Confederation. The country is located at the junction of western, central, and southern Europe. It borders the countries Germany, Austria, Liechtenstein, Italy, and France. Being surrounded by so many countries of Europe, it has developed into a nation with multiple languages. People of Switzerland speak mainly four languages: German, French, Italian, and Rhaeto-Romanic.

It extends up to a total area of 41,285 square Km. Being small in size, its political system is very complicated and fascinating. It sets a benchmark in the world’s political scenario because of its multinational federalism.

Switzerland is home to many lakes, plateaus, and mountains. It is mostly a mountainous landscape surrounded by the high ranges of the Alps. Its capital city is Bern. The city has medieval quarters along with famous landmarks like Lucerne’s wooden chapel bridge.

Do you know? Difference between Gusta and Gustan

Difference Between Sweden and Switzerland

Sweden is located in the west of the Baltic Sea and the Gulf of Bothnia in Europe. On the other hand, Switzerland lies in the heart of Europe and is an inland country.

Sweden shares its borders with Norway and Finland. On the other hand, Switzerland is surrounded by countries like Germany, Austria, Italy, Liechtenstein, and France.

Sweden consists of many lakes, agricultural lands, and forests. Switzerland consists of hills, mountains, and no coastline.

The language spoken in Sweden is Swedish. Whereas the languages spoken in Switzerland are German, French, Italian, and Rhaeto-Romantic.

Sweden has a constitutional monarchy whereas Switzerland is led by the Federal Republic.

Do you know? Pentagram vs Pentacle