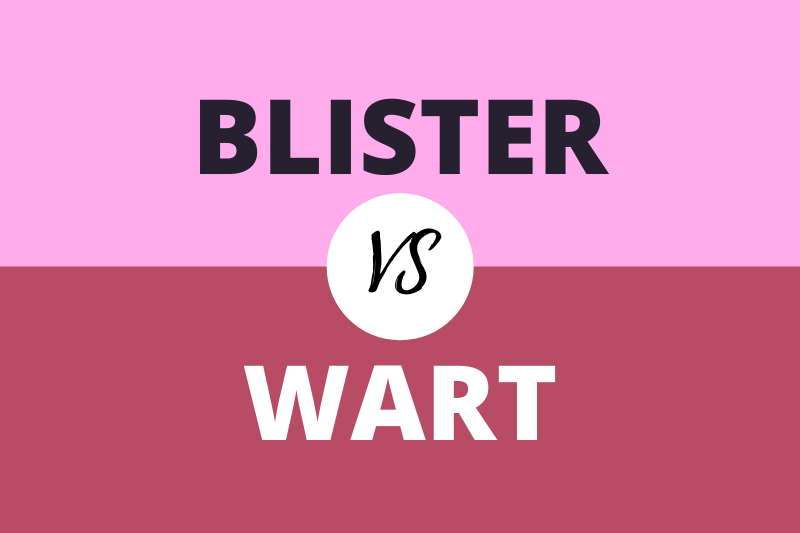 The human body is a complex piece of work. We are organisms, made of organ systems which are in turn made of organs, organs are made of tissue, tissues of cells. This is how we are made. Tissue and cells are fairly simple. It starts to get complicated from organs. Our body often suffers from common ailments such as blisters and warts. But both of these are often used interchangeably. So, let’s find blister vs wart.

All the organ systems in the body are somehow interconnected. Like the circulatory system brings blood to all the other systems of the body. The nervous system relays information to different parts of the body. The digestive system processes the food to provide nourishment so that the rest of the body can perform smoothly. The integumentary system provides the outer covering of the body. It consists of hair, skin, and nails.

Skin is the largest organ in the body. It protects the body against physical, thermal injury, and other harmful substances. As discussed earlier, the organ systems of the body are connected, that’s how they work harmoniously.

Therefore, a lot of the time if there is an issue with some organ of the body, it manifests in the skin in the form of some abnormality. The skin is an organ itself that can have various diseases. Wart and Blister are two such skin diseases.

The difference between wart and blister is a fluid-filled sac formed in the superficial layer of the skin and wart is generally described as cauliflower-like outgrowth due to a viral infection.

The skin is made up of three layers, epidermis: the top layer, dermis: the middle layer, and hypodermis: the innermost layer. Blisters occur on the topmost layer of the skin, which is the epidermis. It usually occurs due to friction between the skin and something else.

The epidermis itself is made of 5 sublayers and the friction causes these layers to separate and the area left vacant due to this gets filled with some sort of body fluid. It could be sebum, plasma, blood, or pus depending on the cause of origin.

A common example of blister is the painful swelling that appears when we wear ill-fitting shoes. The friction between the shoe and the skin causes this kind of blister to appear.

Blisters have other causes too like extreme temperatures, other medical conditions, exposure to some kind of hazardous chemical, repeated and forceful pinching, and crushing of the skin can cause the sublayers of the epidermis to separate and cause blisters.

Depending on the cause, there are three types of blisters: friction blisters, blood blisters, and heat blisters.

Blisters can usually heal on their own. They do not pose any dangerous threat. Covering a blister with a band-aid or gauze is recommended to prevent it from getting infected. It is best to not pop the blister or peel off the skin.

Wart is a kind of skin disease caused by the Human Papilloma Virus (HPV). This virus spreads by contact so if one touches somebody who has a wart then they get infected by it. The HPV virus creates a lesion in the skin and enters the body. That is how it attacks the body.

Warts commonly appear in the hands but they can also appear on the knees, feet, face, genitals. They are non-cancerous bumps. Warts are skin-colored, rough, flat, dome-shaped outgrowths on the skin. They can be painful.  Since they appear on the skin, usually imaging or extensive lab tests are not required to diagnose warts.

Warts can be self-diagnosed as well. Though consulting a physician is always recommended. There are different types of warts like common warts, plantar warts, flat warts, periungual warts, genital warts.

Genital warts are usually sexually transmitted. Warts are usually harmless but there is always the possibility of spreading them to others and it can be embarrassing. Therefore, it is best to treat it with the treatments available. However, there is no treatment available for the HPV virus, so even after the wart is gone the virus still remains in the body.

Do you know? Myeloblast vs Lymphoblast

Difference Between Blister and Wart

Blisters mainly occur due to friction between the epidermis and some other surfaces though there can be other reasons too like exposure to harmful chemicals and extreme temperatures.
Warts are caused by Human Papilloma Virus.

Blisters are thick, large, and filled with fluids. They may be red or skin-colored. Warts are usually skin-colored, flat, rough outgrowths on the skin.

The mode of transmission is important to understand the nature of the disease and to prevent it from spreading. Blisters do not spread by touch. Warts, however, do spread by touch and are therefore contagious.

Do you know? Thick Vs Fat (With Table)