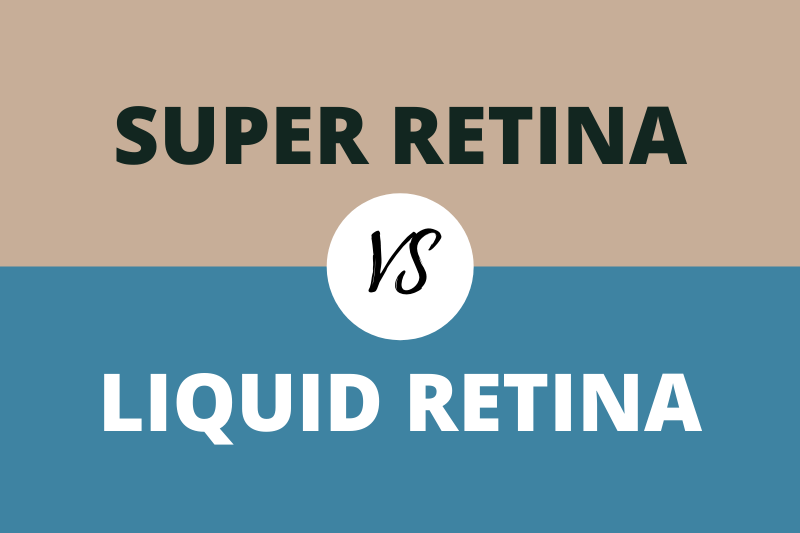 What is the difference between super retina and liquid retina when both perform the same function? A very common misconception arises between these two terms. The terms are almost the same but have a different name. Both the Super Retina and the Liquid Retina come with the iPhones. Nonetheless, there is evidence that both are different from each other. So let’s find Super Retina vs Liquid Retina.

What is Super Retina?

Super Retina is an OLED display that has been found recently on phones like iPhone X, iPhone XS, and iPhone XS Max. Apple designed the Super Retina so that it meets the higher standard of the people. It is one of the best OLED displays in the smartphone industry which offers impressive color accuracy.

The quality of its display is certainly the best, on top of that it has high brightness, extremely good contrast, and excellent cinema-standard with a wide scope. It has the best system for color management, which delivers an optimal viewing experience.

Both Super Retina and Super Retina XDR, which were found in iPhone 11 Pro and iPhone 11 Pro Max, provide a wide range of dark and light areas video and photo and give High Dynamic Range (HDR). It puts in using the organic emitting diode technology.

Super Retina uses advanced technology to provide an excellent viewing experience and raises the standard of the iPhone series. OLED technology gives high contrast and high resolution with no backlight; it discharges light through each pixel and provides a thin display.

It is one of the best OLED displays that undoubtedly provide high contrast, high brightness, excellent color accuracy, and broad color support. An OLED display sometimes shifts color and hue; it is the feature of an OLED display. After long-term use, an OLED display can show visual changes.

What is Liquid Retina?

On 26th October 2018, Apple introduced the iPhone XR with the all-new display called the ‘Liquid Retina’ HD screen, the most advanced LCD display in the industry was introduced to the world that day. The iPhone XR features an LCD screen over OLED, which is just as good as the Super Retina, except it gives you a larger screen in a smaller build.

It crams up millions of pixels so tightly packed that even when you look very closely you cannot see them. It is a super high-resolution display and the innovative engineering allows us to stretch the display into the corners.

The result is an all-screen design with the largest LCD display ever used in an iPhone which still fits comfortably in your hands. The new iPhone 11 also boasts the Liquid Retina HD display.

Do you know? Conform vs Confirm

The Liquid Retina display is by far the most advanced LCD display technology in an iPhone ever. It is the Apple-designed liquid crystal display that is just as good as the Super Retina which was designed to make the older LCD screens that were found on every iPhone model better for improved color accuracy.

Super Retina is a high-density display that uses OLED technology which emits light through each pixel (with no backlight) to deliver an exceptionally higher contrast ratio and better resolution superior to any other kind of display available.

The Super Retina display in the iPhone X is a huge improvement from the iPhone XR’s Liquid Retina display. It sports a higher resolution at 2436-by-1125-pixel, which means more pixels are spread across the surface, which in turn, results in a higher contrast ratio, from a mere 1400:1 to an extraordinarily higher 1,000,000:1.

The Liquid Retina is a term used by Apple for the LCD display on the iPhone XR and the iPad Pro. Basically, it is the same LCD display found on other iPhones except for the iPhone X, XS, and XS Max.

Super Retina usually comes in-built in iPhone X, XS, and XS Max. On the other hand, the Liquid retina is found in iPhone XR And iPads.

The parts of Super Retina are more expensive than Liquid Retina.

Do you know? Social Studies vs History

It is clear as day that both the displays are not the same as the significant difference between Super Retina and Liquid Retina are painfully obvious. We can clearly say that one is the older method of technology, and the other is the newer technology.

Apple uses both types of displays in their devices, but if you are feeling confused about which one is better than the other, then this evident fact that the costlier model is better than the cheap one as they take more, they provide better function.