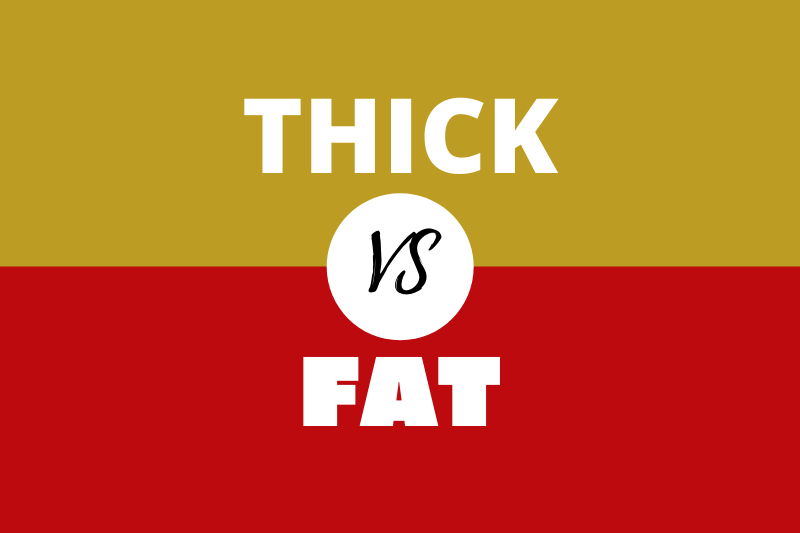 There exists a range of body types based on the size and shape of our bodies. Different kinds of terms are associated with such body types. From being thin to thick, multiple factors such as genetics and body fat percentage play a role to determine the body type. While some people choose to use the words ‘lean’, ‘fit’ or ‘thick’, others use words like ‘fat’ or ‘skinny’. While some might think of these as proper words to describe an individual, others tend to consider it as a slang term.

While trying to describe the appearance of a person, we sometimes use words that have a different meaning. Some might think that the words thick and fat have the same meaning, but there is a slight difference between the two. Both these words represent different body types and have separate connotations.

Fat and thick are adjectives that are used to describe the body of a person. Both the terms mean that the individual has some amount of body fat present, and isn’t completely skinny.

Thick refers to the individual with a body size that is above average. Thick people are said to have a thinner waistline and a thick lower body. On the other hand, fat is used to describe bodies that have an excessive amount of flesh. Continue reading to find out more about these terms.

The adjective ‘thick’ is used to define a certain type of body. People with a thick body type are normally a size more than the average. This word is also used for describing females more than males.

Thick has a positive connotation added to it. It is often considered as a compliment rather than an insult. Some characteristics that are used to describe a thick person include a thin or slim waistline, thicker breasts, a thick lower portion of the body, etc. These characteristics are mostly found in the pear-shaped body.

In the pear-shaped body, the body of the individual is shaped like the pear fruit. There are no specific points of distinction when it comes to thick people. They are mostly considered physically healthy and fit.

The meaning of thick is still not indicated in most of the dictionaries. It is a relatively new word and refers to informal usage only.

Do you know? Step Cut vs. Layer Cut Hairstyle

The adjective fat is mainly used to comment on the body fat percentage. It is used to describe individuals with an excess amount of body fat. Other terms which are similar to the word fat include obese and overweight people.

The word fat is looked at with a negative and inferior connotation. When you use the term fat to describe a person, he/she/they are most likely to feel insulted. The characteristics that describe a fat individual include a stomach bulge, loose skin on the arms, legs, and sides of the body. These features make the body look like an apple. This term is mostly used to describe the body type called Apple-shaped body.

Society tends to consider ‘fat’ people as unattractive and ugly. They are considered unhealthy and are prone to multiple health risks such as heart diseases, high blood pressure, diabetes, etc. The appearance of a fat person gives out the view that they don’t have an active lifestyle.

There’s also the factor of medical problems. Certain medical issues cause obesity that is hard to get rid of. Patients suffer both physically and mentally in such cases. Some people are bigger in size due to the role of genetics.

Do you know? Difference between Cuddle and Snuggle

Difference Between Thick and Fat

When it comes to the appearance of a person, thick refers to a size that is above the average. Fat is used for individuals who have an excess amount of body fat.

4) Body type associated with the term

The society describes a fat person as ugly and unattractive. Thick on the other hand is a compliment for the beautiful curves of the body.

Thick people are not prone to health risks. They are considered slim and fit. Research states that individuals with extreme amounts of body fat are likely to go through multiple health risks. They might face issues such as strokes, diabetes, heart diseases, etc.

It is recommended to carefully understand the words before using them to describe someone. Without the proper usage of these words, you might hurt the sentiments of your close ones.

It is recommended to carefully understand the words before using them to describe someone. Without the proper usage of these words, you might hurt the sentiments of your close ones.

Do you know? Difference Between Louis Vuitton and Louboutin