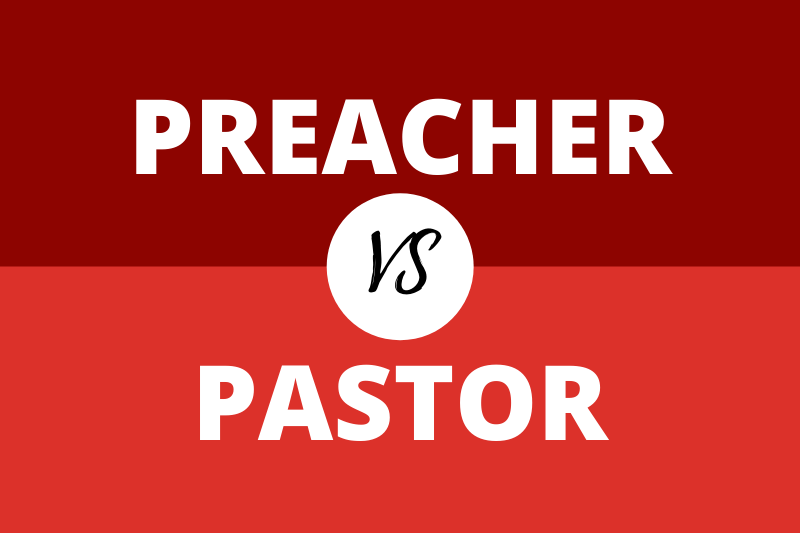 Before we explain preacher vs pastor, let’s understand a bit more about religions.

Most religions in the world are institutionalized. They usually have designated religious places where people go for worship and perform certain rituals and practices prescribed by the religious texts.

These designated religious places usually have a priest who serves the God of that religious institution and is vested some power. This is how major religions in the world, like Christianity, Islam, Buddhism, Hinduism, work.

The officials in charge of a particular church or temple or mosque have a particular rank or designation. There are many such ranks and designations within the Christian church with the pope at the top. The official who leads a parish is called a pastor.

The hierarchy in the Christian church looks something like this: after the people come the deacon, they are the ones who help the priest with the proceedings of the mass. Next comes the priest who is in charge of service in one parish. The Bishop is in charge of a diocese, which is made of a number of parishes.

Archbishop serves a number of dioceses. At the top is the Pope who is the Bishop of Rome and the head of the Roman Catholic Church. A priest is the catholic equivalent of a pastor in  Protestant congregations.

The difference between priests and pastors lies in their rank and role in the service of the church. A preacher preaches the words of God to men. A pastor leads a congregation, performs masses and other religious acts like that.

A preacher is one who spreads the word of God among men. To be a preacher one has to be a great orator. They have to be able to captivate people with their speech. It is their job to inspire people. They have to be charming and dignified. They are like motivational speakers. It is not necessary for them to be ordained. But it is necessary for them to have excellent communication skills.

Preachers are a part of the Church congregation and they help the pastor or priest in their duties as well. Their job is to carry the message of God to people, to reinstate the people’s faith in God through their speech. They are usually good at interpreting the Bible and presenting it in a manner that is both inspiring and easy to understand.

Good preachers become favorite public figures. Pastors too can become preachers These two are not mutually exclusive jobs. A preacher can become a priest by getting ordained. And an already serving priest can be a preacher.

As discussed in the preceding paragraph, the rank of a pastor is second, or third, if you take in the laity or the people, rank within the Church just after deacon. Now, there is a lot of help available but in the ages gone by, the local Church was not merely a place of faith and worship but a place that provided almost all kinds of help to the congregation.

During those times church was the main authority other than the government and this was the stable one and the one people had faith in. Therefore, the role of a pastor has always been a rather important one.

A pastor provides spiritual assistance, that goes without saying, but also a pastor needs to create a safe space within the church for e community. Though nowadays it is encouraged to visit a therapist for any kind of mental distress, in earlier ages the pastor provided council for mental distress if need be.

The more official role of a pastor includes arranging the Sunday mass, interpreting the Bible for the congregation, preaching sermons, conducting worship service.

Do you know? Methodist vs Presbyterian

Difference Between Preacher and Pastor

The duty of a pastor is to lead a congregation, arrange masses, and worship services.
The duty of a preacher is to preach the words of God to the people.

2) Meaning of the word

The word pastor comes from the word shepherd. A shepherd is the one who leads the cattle on their way. In the same way, the pastor’s duty is to lead his congregation towards salvation.

The word preacher describes the role of the position. It comes from the verb “preach”.

There are several ranks within the hierarchy of the Christian church. A pastor falls within those ranks. The pope lies at the top of that chain and the people or laity at the bottom and the priest lies in the third rank after the deacon.

The position of the preacher doesn’t really have a rank or at least an official one. They are a part of the congregation and position-wise are below the pastors.

To be ordained a priest or pastor one needs to have a degree in theology. No such qualification is needed to become a preacher.

Do you know? Baptist vs Pentecostal