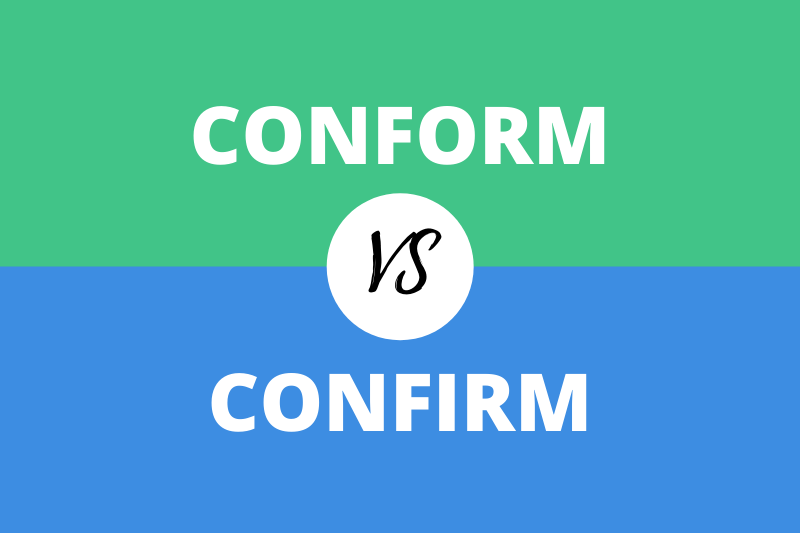 English words can be difficult to understand at times. The words conform and confirm are no exception to this, which at times are mistakenly interchanged. We will explain in detail conform vs confirm.

The word ‘conform’ refers to an agreement to continuously be consistent with something or to obey or comply with a set of given rules or standards. On the other hand the word ‘Confirm’ refers to the action of establishing the truth or making a theory definite or establishing it firmly. Both English terms are verbs which means words that show some form of action (doing words).

What is the meaning of the word Conform?

In simple terms conform is to say that working under instructions just like a machine conforms according to the command given to it. There are various applications for the word ‘conform’, in different situations. For example, people conform to traffic rules on the road which means they need to travel on the road based on the traffic rule.

This ‘conform’ can also be used in explaining the behavior of human beings. In whatever case, the basic definition of conforming is to follow and act according to the given set of rules. We accept the terms as it is and no questions are asked and this is called conforming.

The word conform can be explained as when someone is living or working according to the law or the rules then we say they are conformed to the rules, which means they are following or obeying the said rules. Based on this the terms conformist and nonconformist are born. A person who follows is a conformist and who doesn’t follow is a nonconformist.

What is the meaning of the word Confirm?

The word Confirm is all about truth. ‘Confirm’ means that it is accepted based on the truth. In simple terms, it means something is definite and while taking a decision this term is used. Confirmation is the process of making sure everything is alright. And this word can also be used in the present tense, past tense, future tense.

If there is a list of things to collect or use or do then for making sure all the mentioned things are performed according to the plan we use the word ‘confirm’. So just to make an appointment or a meeting and to agree we use the word confirm.

Even during the explanation of why something has happened whether it is right or wrong, we tend to use this word. We call people to ask whether the news we heard is confirmed or not. Just like the taste of any food is confirmed by us when we actually put it in our mouths. When we deny something that means we are against the confirmation of that particular thing.

Do you know? Of vs For (With Table)

Difference Between Conform and Confirm

Confirm is about evidence whereas conform is the act of acceptance. And the word ‘conform’ means to follow a set of rules. So, the definitions of the words confirm and conform are completely different.

Conform can be used for any type of acceptance or satisfaction and dissatisfaction for any rule or regulation. Confirmation is used while making a decision and must be accepted.

The spelling of these two words is different. Conform basically means compliance with any rule and regulation. On the other hand, confirming is just like attesting.

Conform is just to change our way according to the specifically mentioned way, its synonyms are as follows: obey, follow, abide by and antonyms are as follows: deny, disallow, disapprove. Confirmation will show the accuracy of anything. Verifying, proving, validating something usually come under the synonyms of confirming and contradict, deny are the antonyms of confirm.

Do you know? Index vs Table of Contents (With Table)

Both these words come under verbs but their meanings are totally different in the way they are spelled and pronounced. The word conform means to obey any rules or any guidelines and even instructions. So, when someone is working under a set of instructions, then the word conform is used.

When we book a hotel, we usually need to confirm the dates of our reservation. When we are in college, we must conform to the college rules and norms. When we are against something then they call us rebels which means we are living as an antonym of ‘conform’. And when we are living according to the rules and customs then we are fitting in with them.

Each example will help us understand the difference between the words and their application in the real world. And at any level of consistency conform shows compliance with all the rules and regulations. Confirmation also means that we are trying to explain or say why something is correct or why it is true. Authorization is also confirmation of something.