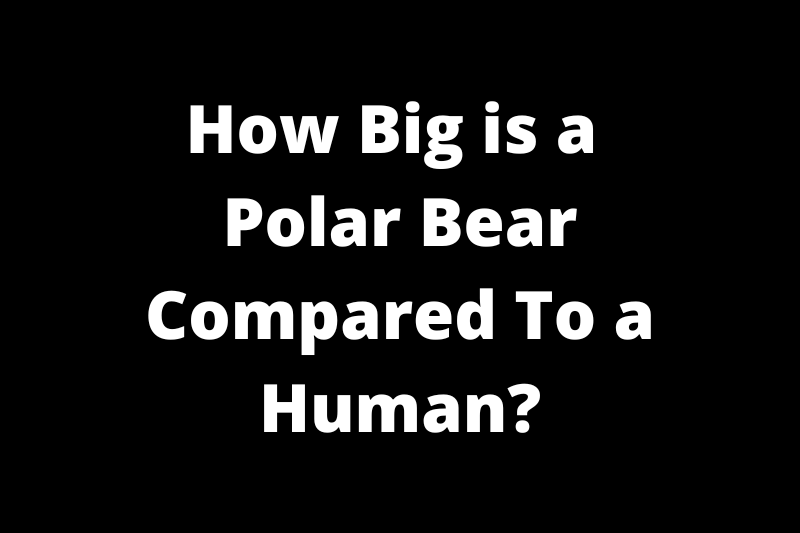 The polar bear is an interesting creature of the Poles that has intrigued man for ages! We can call them cousins of the bear that resides in the warmer latitudes. These animals are found in the Arctic region in harsh and extremely cold climates. Given the location of their residence, not all of us have seen Polar bears except for in pictures in our geography books or photos on the internet. Since we have not seen them with our own eyes it is tough for us to estimate their real size. So, how big is a polar bear compared to a human?

Here are some more interesting facts about a poor bear that you will love to know! Keep reading for encountering more information about the white bears.

How Big is a Polar Bear?

There is a system of measuring to determine the length or the height of mammals by scientists. The measurement is taken from the tip of their nose to the end of their tailbone.

There is an interesting fact about why the male polar bear is larger than the female polar bear; this is because the female attains maturity at five years of age while the male attains maturity at 6. Two different heights are measured for polar bears. When they are standing on all four of their legs they are about 1.3 – 1.6m (4’4” – 5’3”). Whereas when they are standing on two feet then their height is 3m (10 feet) tall.

How Big is a Baby Polar Bear?

Have you seen a baby polar bear in pictures and videos? Well, they are so adorable to look at! When the newborn is measured it is 30 centimeters or 12 inches in size.

The way the polar bears give birth to young ones is a very unique process! They construct a maternity den in which the pregnant mother enters for eight months during which time she does not eat or excrete. This can also be regarded as similar to the hibernation period. The time of birth is usually around January or December. After the baby is born it remains in the den with the mother for another 2 months after which the little one finally comes out.

How Much Does Polar Bear Cub Weighs?

The cubs of the polar bears are the little polar bears that weigh around 454-680g. But surprisingly they stay inside the maternity den for a certain period until they start weighing around 10 kg and that is when they decide to come outside the den.

However, this factor is not constant since it is seen that polar bears weigh about three kilograms as well as 24 kilograms as they come out of the den! So the weight at which the young one will come outside greatly varies. When the mother polar bear gives birth to a single child then the weight of the baby is the most while when they give birth to twins their weight is divided and sometimes triplets are also born who sadly do not survive in most cases.

Size of Polar Bears Compared to Other Bears

There are several other bear species on this planet and each of them has a different size and weight! Let us have a look at a few common bears and compare their height and weight with that of polar bears. Here is the polar bear size comparison with other bears.

The Grizzly bear occupies the continent of South America and these brown bears are much smaller in size than polar bears. The adult male grizzly bear weighs 150-350kg. Whereas the weight of the adult male polar bear is 350-680kg (775-1500lbs).

This is also a kind of brown bear. They are a subpopulation of grizzly bears that are found in parts of Alaska and Kodiak Island. The weight of these bears is around 357kg hence we can see that their weight is somewhat similar to the weight of the smaller-sized polar bears. They have a height that is shorter than that of a Polar bear but is certainly well built and even more agile.

How Big is a Polar Bear Compared to a Human?

How Tall is a Polar Bear?

It is estimated that the height of the male polar bear is 1.5 times taller and 5 times heavier than the weight of an average human male.

How Much Does a Polar Bear Weigh?

There is no scope for doubt that the size of the paw of the polar bear is more than that of the palm of humans. The width of the paw is 12 inches in diameter.

On the other hand, the diameter of the palm of humans is 4 inches which is three times less than that of polar bears.

The size of the paws of the polar bear is big and the paw-to-body ratio is also high which enables them to walk on the thick masses of ice and thin sheet of snow!

The size of the claws of the polar bears is also very big, they are ranging as much as 3.75-6 inches. This is useful for the animal as claws are beneficial for hunting.

1) How much strength does a Polar bear have?

2) What is the largest size polar bear ever seen?

The Guinness Book of Animal Records has stated that the largest Polar bear that was shot in Alaska weighed 998 kg (2,200-pound) at Kotzebue Sound, in 1960. This was the largest size of polar bear ever recorded.

You must be thinking since these are large mammals they are likely to be more sluggish and slow! But that is wrong since despite being so big they have a speed of up to 40 km/h (25 mph) over short distances.

But running at such a fast pace makes them feel hot as this requires a lot of energy. Hence if you see a polar bear on National Geographic Channel then you must note that they walk at a rate of 5.5 km/h (3.4 mph)

4. Can a human outrun a Polar bear?

Usain Bolt is the fastest runner in the world with a speed of 27.5 miles per hour! So unless you are him you don’t stand a chance against a polar bear.