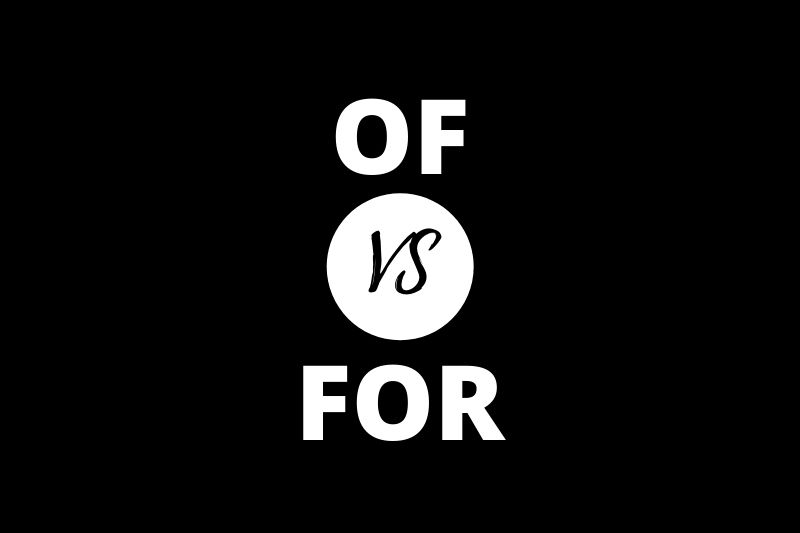 Among the various prepositions, Of and For are the most used ones. These two prepositions vary greatly in many ways. So let’s study of vs for in detail but first understand what are prepositions?

Prepositions form an integral part of English speech. These are used in almost every sentence. Prepositions tell us when and where an object is located and its relation to another object. Most of the English sentences have some kind of prepositions in them.

The importance of prepositions goes a long way. It helps in understanding the relationship between two objects. These short words demonstrate a specific location, direction, position, or time.

Another important fact is that prepositions help to understand the relation of a noun to another noun. These are used to portray abstract ideas such as the purpose or a comparison.

The difference between the prepositions Of and For is that Of shows the ownership or distance from something or even the result that comes next. On the other hand, For as a preposition is used to show the purpose, destination, or the amount of something.

Comparison Table: Of vs For

Of is one of the most commonly used prepositions when it comes to the English Language. Of, as an unstressed form, is written as. Ã¦f. In a much simpler form, Of means away or away from. Sometimes it also means related to.

Of is used to define the relation of an object being connected to something or when something belongs to something. It portrays the possession, origin, or belonging of the thing. There are multiple meanings of this preposition such as: coming from, caused by, separated from, apart from, and belonging to. It is used to describe things in a much broader sense in relation to distance, cause, origin, and direction.

Let us take a look at some of the examples:

1) Of all the women in this room, you are the most beautiful one.
2) There is an abundance of oil and natural gas in the Spratly group of Islands.
3) Of course not!
4) His mother was charged with the instruction of justice
5) The Sahara desert is one of the most remote parts of the world.

Different meanings of the term ‘Of’:

For is also a commonly used preposition. This preposition is used often when you are speaking, reading, and writing. This is used to explain a purpose, destination, or specify the amount of something.

Of is sometimes also used to define a specific place a person or thing is going to, is sent to, or is given to. The word For had originated in the 900s and it is said to have developed from the word ‘before’.

Apart from the main meaning, there are multiple meanings of the preposition For. These include: instead of, in favor of, with the purpose of, in place of, and with regard to.

For is used to describe a certain period of time like a month or a minute. The word is used while referring to distance, time and purpose.

Let us take a look at some of the examples:

1) All for one and one for all!
2) I see everything fair and square. Nothing is taken for granted.
3) This is for Sparta!
4) I am writing articles for my friend Chloe.
5) Are you against it, or for it?

Multiple meanings of the preposition for:

Do you know? Theatrical vs Unrated Version

Difference Between Of and For

The preposition Of is used to denote distance, origin, direction, and cause. On the other hand, For as a preposition is used in relation to time, distance, and purpose.

There are different sets of meanings when it comes to Of and For. Of also means coming from and For means in place of.

5) Used as a conjunction

Do you know? Amish vs Mennonites

Multiple words are misplaced and misused while forming English sentences. The prepositions Of and For can also seem confusing for people who are starting to learn the English language. These two prepositions are used in relation to different things.