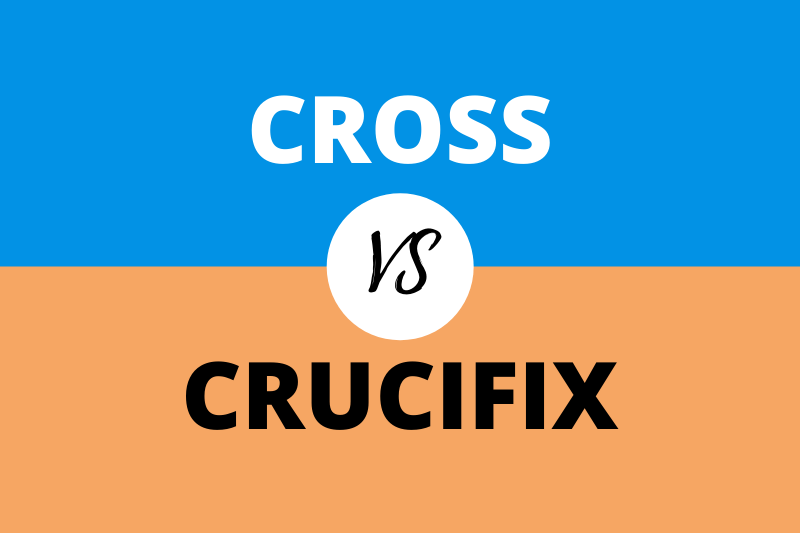 Many people use the terms cross and crucifix interchangeably. In this article, we will learn cross vs crucifix.

Every religion has some important symbols. Throughout history, these religious symbols have been widely used to portray a message of faith. People throughout the world use these symbols to express the ideas and views of their religion.

In Christianity, the symbols of faith are the Cross and the Crucifix. Many people tend to use these terms interchangeably without understanding the meaning behind them. There are a lot of differences between the two symbols.

The main difference between the cross and the crucifix is that the cross is a cross-shaped item without the symbol or figure of Jesus attached to it. Whereas, Crucifix is a cross with Jesus engraved or depicted on it in some way. Let us take a look at different aspects of these symbols.

The Cross is formed with the help of an upright bar and a transverse beam. It was used by the Romans for the purpose of execution. But later developed as a very important symbol for the Christians. It denotes the faith of the whole Christian community towards Jesus Christ.

Cross symbolizes the commitment that Christians have towards Jesus. It is used as a gift during ceremonial functions and religious rites.

Previously the cross was used to denote a negative feeling. It symbolized death which involved extreme pain and torture. For the same reason, Jesus Christ was hanged on the cross after all the cruel treatment. While it was not popular in the early times, later on, it changed into a symbol of faith.

There are different types of cross such as the Latin cross, Jerusalem cross, Saint Andrew’s cross, Saint Anthony cross, and the orthodox cross. Also in the fashion community, many international celebrities and brands are using this symbol to define their style.

The crucifix represents the emotions that Jesus Christ went through during the execution. It is a symbol that consists of the figure of Jesus Christ engraved upon the cross.

The crucifix symbolizes the extreme suffering and pain that Jesus Christ had to go through. The use of the crucifix is very common in Roman Catholic churches. The word crucifix means ‘fixed to a cross’. It is completely different from a bare cross.

The word corpus is used to represent Jesus Christ on the cross. The crucifix holds a very important place in the Christian community. It is admired by many and is used to acknowledge the life and journey of Jesus Christ. The pain and suffering that he had to go through during his death and the final resurrection, are all symbolized using the Crucifix.

The use of crucifix is very popular in the catholic churches and during public religious services. It is also an obligation to use the crucifix in specific rites or religious ceremonies.

The Roman Catholic churches usually place the crucifix above the table where bread and wine are served in communion services. Some Christians also oppose the symbol of the crucifix because they believe that Jesus Christ was not resurrected on the cross.

Do you know? Catholic vs Baptist

Difference Between Cross and Crucifix

A cross is a combination of a standing post with a transverse bar. It was used in ancient times for the purpose of crucifixion. A Crucifix represents Jesus Christ on the cross.

The Cross is like a symbol so it is not worshiped. The Crucifix has the engraving of Jesus Christ so it is worshiped by the Christians.

5) Depiction of pain and suffering

A cross is not a crucifix. A Crucifix on the other hand is a type of Cross.

You will find a Cross in the Protestant churches. A Crucifix can be found in the Catholic church.

The Cross is more popular than the Crucifix.

Do you know? Pentagram vs Pentacle