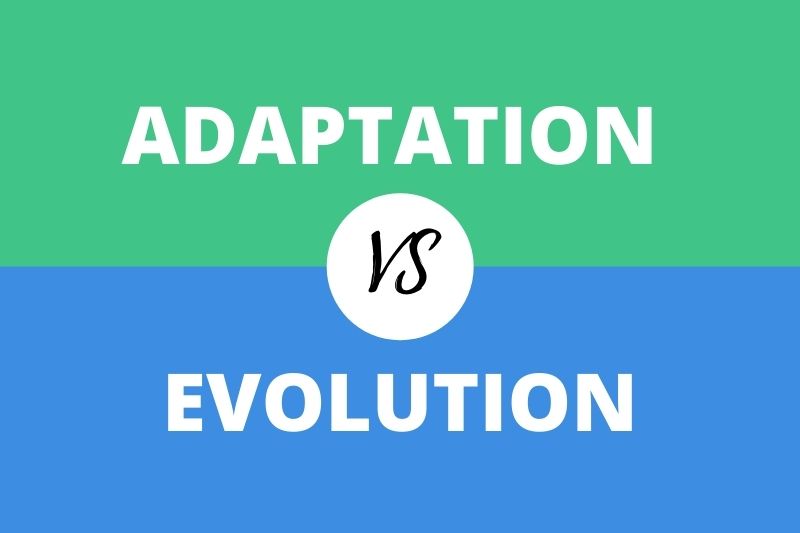 Scientists have debated Adaptation vs Evolution for a long. Adaptation is the biological mechanism that helps organisms to adjust to new environments and to changes in their current environment.

Even though scientists discussed adaptation before the 17th century, it was not until then that Charles Darwin and Alfred Russel Wallace developed the theory of natural selection.

The basic idea of natural selection is that the traits that can be passed down allow organisms to adapt to the environment better than other organisms of the same species. This ultimately enables better survival and reproduction compared with other members of the species, leading to evolution.

It is the physical or behavioral trait of an organism that helps it to survive in the surrounding environment.

Adaptation means being able to endure all climatic conditions of the ecosystem which includes other species and predators. These predators and species often compete for the same food and shelter as the organisms.

Adaptation has several benefits like increased agricultural production and the high income of a household.

A great example of adaptation is how several plants have adapted to life in the deserts. This is an example of structural behavior because deserts are hot places. An example of behavioral adaptation is of animals who migrate. Adaptation helps species to survive and reproduce in an ecosystem. Which ultimately leads to evolution.

Evolution means the change of a character in a species from one generation to the other. This process counts on natural selection. The definition of this subject is based on the evolution theory that all species are connected but change with the course of time.

Evolution is unforeseeable and takes many years to finally get there. In other words, it is slow. It also creates wasteful systems and processes. Without any doubt, evolution is a process that is powerful, which leads to rapid changes in the characteristics of an organism. Its limits, however, come from the absence of genetic variation, trait interaction, and difficulty in evolution.

The large-scale evolution is called macroevolution; stasis, character change, speciation, and extinction are the four patterns of it.

Stasis: Some species did not change over a long period of time and they are called live fossils.

Character change: The development of analogous and homologous structures.

Speciation: The emergence of new species due to the geographical or reproductive isolation of populations

Extinction: Many species have become extinct during evolution.

Do you know? Myeloblast vs Lymphoblast

Difference Between Adaptation and Evolution

Adaptation occurs when a gene changes in form or nature by accident. Some of the reconstruction can help a plant or animal live better than others in an ecosystem with other species without such mutation. Evolution occurs when transmissible contrast becomes more common or rare in a population. The differences can be either through random genetic drift or non-random natural selection.

Adaptation helps in survival and moving on with life. Organisms and plants can survive different situations in the ecosystem due to adaptation. Evolution is essential in solving problems that affect lives. For example, researchers must know the evolutionary pattern of the disease-causing organism for them to stay ahead of pathogenic diseases that they may cause.

4) Degree of the Change

With the help of adaptation, many organisms have passed through slow stages and they have survived unfavorable conditions. Biotic environments like hunting efficiency are directed and reduce adaptation levels. Evolution is affected by the mutation, flow of genes, drift in genetics, and natural selection.

Whereas adaptation occurs under the effect of environmental conditions, evolution occurs due to speciation.

Do you know? Puerto Rican vs Mexican

Adaptations are physical or behavioral characteristics that make an organism survive in an environment. The transmissible variations occur as a result of random mutations which are quite rare.

Adaptation occurs due to mutation or natural selection. A mutation is a rapid genetic change that could be random or accidental.

Evolution also takes place when characteristics that are inheritable become regular or unusual in species. These heritable differences are either non-random through natural selection or random through genetic drift.

Environmental conditions cause rapid evolution because of their strong selective pressure. They affect a variety of essential ecological and life-history characters like species interaction and community structure. This prompts the species to evolve fast causing genetic and phenotypic shifts in generations.