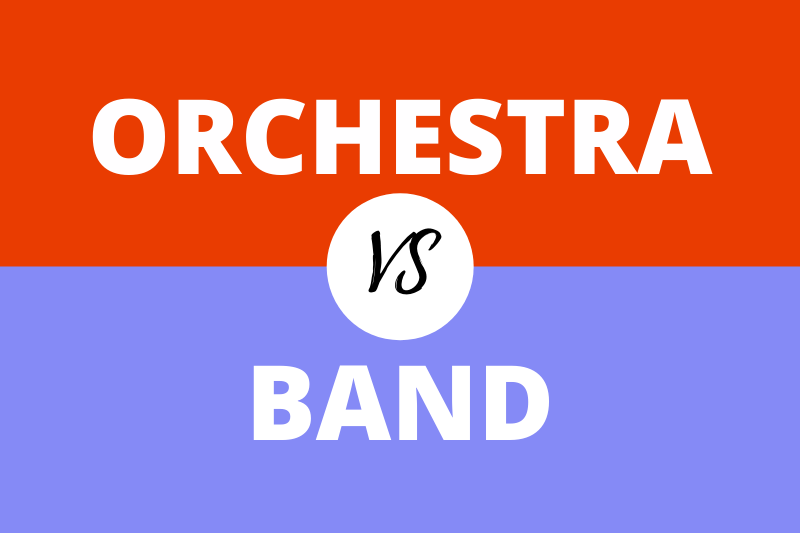 The world of music involves a lot of instruments. Depending on the usage of instruments and music composition, the terms band and orchestra are very popular. So let’s find out more about orchestra vs band.

An orchestra involves a family of instruments where the violins are placed at the front and the strings are staged at the center. On the other hand, certain bands also tend to use string instruments in their music composition. These bands are known as symphonic bands. String instruments in a band usually include the cello, piano, bass, or harp. Both the music troupes have separate identities that form a part of the music family.

Orchestra involves the use of certain instruments which are segregated into strings, woodwinds, brass, and percussion. The entire group is led by a music director or conductor. Bands usually do not have string instruments

An orchestra is a large group of musicians and instrumentalists who usually play some kind of Western classical music or Opera. The instruments that are used in an orchestra belong to the family of strings, woodwinds, brass, and percussion. The whole group is guided by a conductor or a music director instructing the members to play the music in a certain way.

Orchestra seems to have emerged during the 17th century when the Opera had started to develop. The members of the orchestra use instruments like flute oboes, horns, trumpets, and kettledrums. A full-scale opera consists of around a hundred permanent members who are in charge of various instruments like violins, clarinets, flutes, etc.

A band consists of a group of musicians who play the instruments like woodwinds, bass, and percussions to make modern music. Bands normally do not include the use of instruments that belong to the string family.

During the eighteenth century, the Germans formed small groups of people who played instruments like bassoons and oboes to make music. Later in the 18th century, this type of music started to become more popular among the Turkish people. Janissary music is a kind of music played by these Turkish people. Such music is made using instruments like drums, flutes, triangles, cymbals, etc.

Marching bands were formed during the revolutionary war that took place in the United States. These bands included small groups of people who played bugle, fife, and drums while marching during the battle. Nowadays marching bands are used during parades and football games only.

Bands play a very important role in the music industry. Modern music consists of rock, heavy metal, pop, funk, R&B, and many more. Some examples of bands include The Beatles, The Rolling Stones, U2, Led Zeppelin, and Pink Floyd.

Difference Between Orchestra and Band

An Orchestra consists of a group of musicians and instrumentalists who are guided by a music director during the performance. The band has a group of vocalists or musicians who perform on stage, radio, or television.

An Orchestra usually has more than 100 members. A band has fewer members, unlike an Orchestra.

There are two types of Orchestras: Chamber orchestra and Symphony orchestra. Bands come in many types that they can play music.

Do you know? Buck vs Doe

Music has evolved in many ways throughout history. During the early times, people used to perform for smaller crowds. At the same time, orchestra music can be traced back to ancient Greece where large numbers of performers used string instruments in an auditorium.