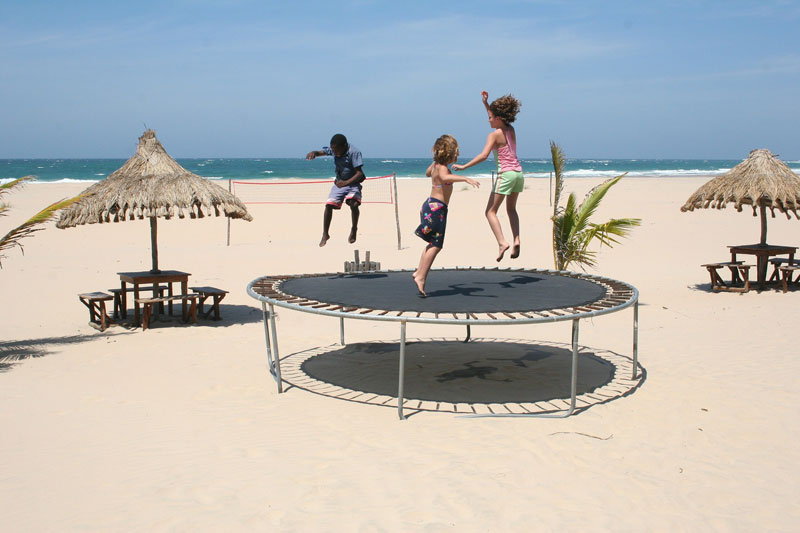 Trampolines are a fun way to spice up your backyard. They add a fun element to kid’s parties. Similar to bike riding and outdoor swing sets, trampolines encourage children to go outdoors and play. Children of all ages can partake in trampoline games.

Parents may have reservations concerning the safety of letting children play on trampolines. These days, trampolines come with safety nets to help protect children from falling out. Further, trampolines are inexpensive ways of getting children away from their gadgets and into the backyard for physical activities. Parental observation is still recommended.

Trampolines are durable and last a long time. In case of any damage to the trampoline, spare parts are easily available for the speedy repair of the item.

Following are 25 fun games that children of all ages can play on the trampoline.

It is one of the most popular trampoline games and is similar to high catches with a ball. The twist is that one player is on the trampoline.

Ideally, a tennis ball is used to play this game. One player stands outside the trampoline, while the other stands inside the enclosure. The outside player has the ball and throws it high towards the enclosure.

The player inside must bounce on the trampoline and catch the ball. Each ball caught while airborne earns the player a point. The players can interchange positions after a few rounds.

Ring Around the Rosy

Players stand in a circle facing each other on the trampoline. They all walk in a circle chanting ‘Ring around the rosy/ Pocket full of posies/ Ashes, ashes, we all fall down.’

This is a fun twist on the game that all of us have played as kids.

Monkey in the Middle

Another fun trampoline game that most children play. The trampoline adds an element to make the game more exciting.

The monkey in the middle must bounce on the trampoline and try to catch the ball while the ball in mid-air. When the monkey catches the ball, the person who threw the ball becomes the new monkey.

It is one of the trampoline games which is perfect for smaller kids who are not familiar with the trampoline yet. A player is chosen as ‘It’ and they stand on the trampoline. This player closes their eyes and counts till 10.

All other players are on the ground and must move around. After counting to 10, ‘It’ opens their eyes and points in a direction. If a player is standing there, they are out.

The game goes on till there is only one player left. They win the round and become the new ‘It’.

Who doesn’t love a dance party? Add a trampoline to the party, and you’re set to entertain people of all ages. Get all players on the trampoline. Remind the players that they must keep their distance and be mindful of the people around them. Start playing the song.

When the song begins, players must walk around the border of the trampoline in a circle. As the chorus approaches, shout ‘Bounce!’

On hearing this chant, players must begin bouncing on the trampoline to the beat. Players bounce until they hear ‘Walk’ again. The rounds continue in the same manner. This game levels up your usual dance party.

More Games for Kids: Mother May I Rules, Instructions & Variations

When the player loses balance and releases their limbs, the round is over. Players can compete to see who releases their arms the least in a stipulated amount of time.

This is one of the rare trampoline games which also works the brain. Players decide an order amongst themselves.

Players must perform the tricks in the right sequence without forgetting any of the tricks. If they fail to do so, they are sent out from the game. The last player standing is the winner of the game.

Players stand in a circle on the trampoline while facing each other. One person begins counting – ‘One, two, three, sit!’ When the player says sit, all players must sit.

This will result in some members bouncing up if they are not fast enough. This is a fun game to play with a smaller group of friends.

Eggs in the Nest

One player is chosen as the ‘Bird’. They sit on the trampoline which serves as their nest. All other players are sent out of the backyard.

The bird keeps its eggs – colored plastic balls – in various places in the backyard. The other players are called back. The bird says ‘Go!’ and all the players run to find the bird’s eggs. Each player is assigned a color and must look for eggs of that color. On finding them, they must keep them on the trampoline.

When the bird is satisfied, the game ends. The player who found the most number of balls wins the game. The winner becomes the bird for the next round.

The player chosen as the sleeping baby climbs the trampoline and lies down. Their eyes must be closed and they must pretend to be asleep. Other players sneak up on the baby and must try to tag them.

Once tagged, the baby must try to guess who it was. If guessed correctly, the player who tagged the baby becomes the new baby.

Keep a timer and time how long it takes players to get out. The player who stayed in the longest wins.

Divide players into two teams. The first team chooses a player as the ‘King’ and sends them to bounce on the trampoline. All the players of the other team become ‘Attackers’. The Attackers must throw balls at the King. The King must evade the balls.

If the King is hit three times, the team loses the round. The person who threw the last ball becomes the King from the other team. Time each round.

The team that has the highest total time is the winner of the game.

The game is played till any player reached 10 points. They will be the winner of the game.

At the beginning of each round, a player shows a trick to be performed on the trampoline.

Every player must try the same trick. If they fail at executing it, they get one letter in the order – D, O, N, K, E, Y. The person who spells DONKEY gets out. The last person standing is the winner.

One person sits in the center on the trampoline. They must have their eyes closed. The other players chant – Dead man, dead man, come alive/ Come alive when I count to five/ One, two, three, four, five. The person in the middle starts crawling around trying to tag the other players. The other players must try to escape the dead man.

They can move around in any manner on the trampoline but they must not jump over the dead man. If the dead man tags a player,  they must freeze and become a dead man as well.

The last player standing is the winner of the round.

The aim of the player in the middle is to get the others to fall down. They can use any means except physically touching the other players. They can bounce on the trampoline, make jokes, etc.

When all other players have fallen, the person in the middle wins.

All players are on the trampoline. This game is inspired by a famous dance between a Bull and the Matadors. One player is chosen to be the Bull. The others are Matadors.

The Bull must try to tag the Matadors. He can chase them while being on his hands and knees. The Matador that the Bull tags becomes the new Bull for the next round.

Everyone is familiar with this game. The trampoline version is more exciting and fun for two players. Both players say ‘rock, paper, scissors, shoot!‘ As they yell ‘SHOOT!’, both players must bounce and land on the trampoline.

If they intend to shoot rock they must land curled up, for the paper they must be stretched out, for scissors they must be sitting. Their body positions indicate what item they have chosen. As usual, rock beats scissors, scissors beats paper, and paper beats rock.

The round ends when the player is knocked over. The positions are reversed in the next round.

This is a fun game for all ages and all sizes of groups. All players are on the trampoline and must be bouncing. When a player shouts ‘Bum Jump!’, all players must land on their bum and then jump back to their feet.

Any player can call out at any time. If the player falls, they are out. The last player standing wins the game.

This game is perfect for children of all ages. Colored chalk is used to draw different shapes on the trampoline. The referee calls out the name of a player and a task that they must perform. It can range from easy to difficult. For example – Peter, do a front flip on the red square.

Players who fail to execute the command are out. The last man standing is the winner.

Two players sit on opposite edges of the trampoline and hold a jump rope between them. They constantly shake the jump rope which gives the appearance of a slithering snake. The other players must jump and try to avoid getting hit by the jump rope.

Having a trampoline encourages kids to get out and play outdoors. The games listed above can make the experience more fun for kids. Trampoline jumping helps build stamina, increase coordination, and control over the body.

It also lays a solid foundation for many sports like gymnastics and parkour. The fun games will surely make kids look forward to their time outdoors.

Note: Please do ensure to keep the trampoline in a safe space and cover it with a safety net. Keeping padding around the trampoline reduces the risk of injury if anyone were to accidentally fall out. Have safe fun!