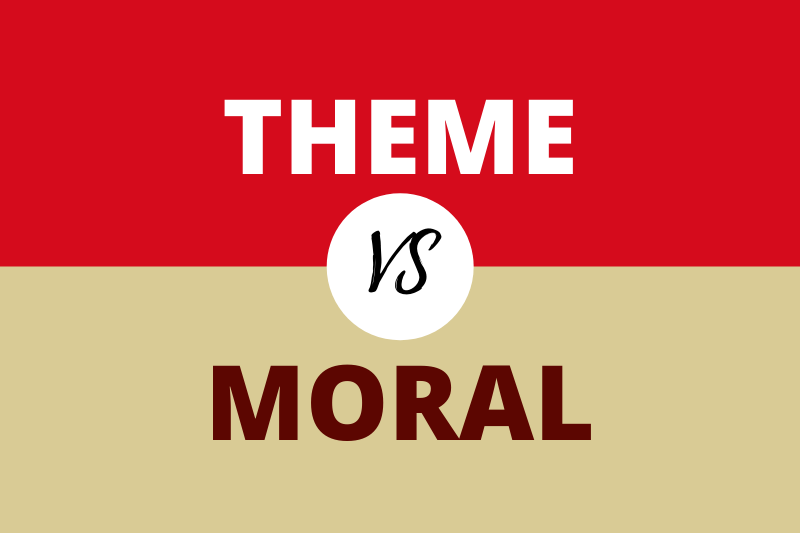 Every story, act, or play is expected to have a theme and a moral at the end. But are these two terms the same? The terms theme and moral differ in many ways. Both have significance and certain purposes to serve. So let’s know theme vs moral.

The theme of a story is said to be the subject matter and the moral of a story is a message. Especially for academic purposes, it is not only important to define the terms but also analyzing the content deeply is helpful. Fictional works often have a theme and a moral lesson for the readers.

The main difference between the theme and the moral is that theme is actually the central idea written by the writer that follows throughout the story. The theme is usually conveyed by the characters for the plot and setting of the story.

On the other hand, the moral of a story is the message that the author is trying to tell through the story. The moral of the story can also be the theme of the story. But the opposite of this cannot happen.

The central topic of discussion in the story is the theme. It is a very important part of the story and acts like the concept on which the stories are based. The pattern is followed throughout the story. Without the presence of a theme, a fictional work is not complete. The thing acts as the unifying concept behind a story. Based on the theme the story starts to build up and showcases multiple situations.

A theme is usually an abstract idea or universal truth in any form of art. It can also be defined as the idea that pervades or reoccurs a work of literature or art. The writer always makes sure that the course of the story continues to expound on the theme. It will keep on developing the story or repeat throughout the story.

One story can have multiple themes. The theme will be depicted through the plot of the story and the characters. It is not directly mentioned in the story and is usually left out for the readers to understand. It can be noticed in the story because of its constant occurrence in multiple sentences.

Some common examples of themes include:

A story normally has one moral that is portrayed throughout every line. The model is shared at the end of the story and this is a single-line statement. The main purpose of a model in a story is to teach a valuable lesson pertaining to life. One can find morals in the stories of children.

Moral books play a very important role in the development process of kids. These stories help to change the perception of the life around them. Moral stories are written with the purpose of teaching only.

Even though in the old moral stories one can find the statement at the end of the story, nowadays the writers choose not to directly mention the moral. It is left for the reader to analyze by themselves.

Some examples of a moral include:

Do you know? Difference Between Fairy and Faerie

Difference Between Theme and Moral

the theme is usually the subject matter of discussion in the story. The moral of the story is a lesson that is conveyed to the readers.

The theme of a story is a basic idea that is portrayed by the story. The moral of the story is a lesson that can be implemented in real life.

The theme of the story tends to appear multiple times throughout the story. Whereas, the moral of the story only appears at the end.

The theme of the story is not directly mentioned anywhere in the writings. It is left for the readers to understand. On the other hand, the moral of a story is mentioned at the end. Nowadays, the writers choose to not disclose the moral direction and leave it up to the readers.

The theme can be seen as an occurrence of words. The moral of the story is a statement.

The purpose of a theme is to create the story on a specific line. The purpose of the moral is that it brings a lesson to the table.

A story can have multiple themes but not multiple morals.

Do you know? Black and Milds vs Cigarettes

Moral and theme are two very confusing terms of a story. Many people tend to get confused between these two terms. While the theme forms the story of a fictional work, the moral of the story is portrayed in the end.