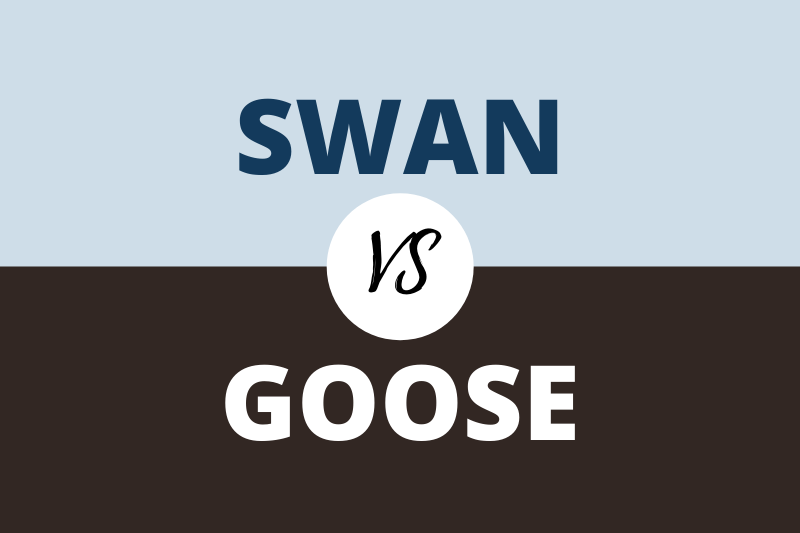 Swan and Goose are water birds who belong to the family of Anatidae and Anserinae. Both of these birds look very similar at first. They use their webbed feet to move forward while swimming. but there are some differences also. Let’s find out more about Swan vs Goose.

The Swan and Goose evolved from the group of ducks around 30 million years ago. Then the birds started evolving separately and developed unique identities. Let us take a look at some of the characteristic features of Swan and Goose.

The difference between these birds is that Swans have a larger body length, wingspan, and more weight when compared to a Goose. However, certain types like the Tundra Swan, Bewick’s Swan, and Canada Geese are the exceptions in this case.

Swans also have a long and thin neck with an S-shaped curve. On the other hand, Geese have a short and thick neck that looks straight. A Goose is smaller in size than a Swan and has longer legs too.

What is a Swan?

A Swan belongs to the group of water birds. They have long thin necks, webbed feet, broad bills, and legs that are short in size. Swans might be completely white in color, white in color along with a few black spots, or in certain cases completely black. The jagged bill of the swans acts as teeth that help with catching and eating fish.

The swans belong to the family of Anatidae. They fall under the genus of Cygnus. These birds previously failed under the category of ducks. Then they evolve to form 7 species. Out of these seven species, one ended up becoming extinct. Coscoroba swan is a species that exists but is not considered to be a true swan. Swans are found in a cold or temperate climate. Some species that belong to the waterfowl category, are either completely or partly migratory.

A swan is said to mate for life. The birds are usually very protective of their nests and show aggressive behavior when exposed to any kind of threat. Because of their large size, swans are said to have very few predators. Some predators like the fox, coyote, raccoons, and wolves hunt their eggs and the adult swans.

In terms of color, a Goose can be either blackish, greyish, or brown in color. They have small white patches on their belly area and on the tail. They also have webbed feet and a bill that is short and broad.

Just like swans, geese belong to the family of Anatidae and the subfamily of Anserinae. They had evolved from ducks to form 22 subspecies. These come under three different genera.

Geese are known to be monogamous and mate for life. They are very social in nature, unlike the Swans. Because of their small body size, geese are often attacked by predators like coyotes, wolves, and raptors.

They are docile in nature but sometimes they can get aggressive. When they feel threatened, they vibrate their necks and run towards the enemy.

Do you know? Difference Between Korat and Russian Blue

Difference Between Swan and Goose

While Swans have 7 species under one genus (Learn more here: https://swansg.org/the-swans/), Geese are included under 3 genera and 22 species.

Swans are big in size, heavyweight, and have more wingspan than a Goose. Geese on the other hand have a short neck and long legs.

Swans are fully white or white with black spots and sometimes black with white spots. Geese are found in black, grey, or brown colors.

Geese love to socialize and live in groups. Swans, on the other hand, are not social animals and like to wander alone.

Swans belong to their group of ‘threatened’ animals according to the status of conservation of animals. The status of Geese is not very concerning.

Do you know? Bail vs Bond (With Table)

Swans and Geese have both evolved from the same bird and it is sometimes difficult to point out differences. The easy way to spot them would be to look out for three things: their appearance, body color, and size. A swan usually has a long, thin neck with short legs that make up a bulky body.

Swans are less social when compared to a goose. They are also more aggressive than geese. Apart from their large bodies and aggressive anti-social behavior, Swans are prone to excessive hunting and poaching by humans.