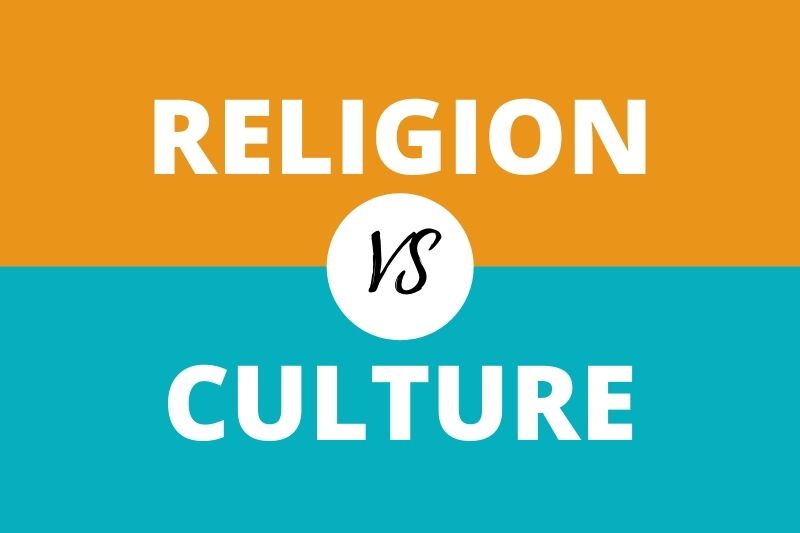 Religion vs culture is a hotly debated topic with many layers to it. But before that let’s learn more about society, religion, and culture.

Man is a social animal. We have created the very concept of society as a system to live in. And within this society, we have created more systems to make it functional.

Two of those aspects which make up society and thus the people in it are culture and religion. Both play massive factors in the identity of a person. Both culture and religion are not universal on this planet. They differ from region to region, nation to nation, even state to state. In a diverse country like India or the U.S. religion and culture may differ from block to block.

So, culture and religion are a part of a person‘s heritage and are not just about the geographical location they are in, especially in today’s world. They are a part of our tradition, our roots.

Religion is the belief of humans in their respective idea of the Almighty. Religion is often considered a subset of culture itself. Culture is the beliefs and practices of a community or a society. It’s the social heritage of a community. Culture comprises many things. This is the difference between culture and religion.

This universe is a huge mystery to us, we know nothing of its origin. We human beings have a compulsion to find meaning in everything, especially the meaning or source of our existence. This is where religion comes in, the belief that the human race has a creator, an omniscient being, the Almighty.

Every religion has its own version of the creator and the people or community who subscribe to that religion believe in that creator as having created everything we see around us.

Religious holidays are marked in the state calendar. It’s a way for a community to come together.

The concept of culture is so broad that it becomes vague sometimes. Just like religion, culture develops within a group of people and it develops a part of their identity. The culture of a particular place consists of many things like beliefs, religious or otherwise, common habits or a way of doing things, common activities.

The various art forms of that place or community are how the culture of that place is expressed and the same art becomes a part of that culture. This involves all types of art like music, dance, literature, paintings, the unique form of expression through this art is what makes the culture of a place.

Food and food habits are also an important part of a community or ethnicity’s culture. Culture is a hereditary thing, it is passed on from generation to generation within families which are the forming units of any society. It’s is a social heritage.

Culture is shared amongst a number of individuals and thus it gives a sense of belonging to the people coming from the same culture. Religion is considered to be within the preview of culture. Religion plays an important role in defining the culture of a place or community.

Difference Between Religion and Culture

Religion is the belief of humans in an Almighty who creator everything around us, this creation. It varies from region to region, from one group to another.

Culture is an abstract concept that defines a particular group of people through their practices, food, art, traditions, etc.

The only component in religion is the religious belief of the particular religion.
Culture has different components that ultimately define culture like art, traditions, common practices, food, sometimes even religion.

Religion is based on the individual or community’s belief in their idea of the Almighty or the Creator of everything. Like, in Christianity God is the father, Almighty, and Jesus his son. In Islam, Allah is the omniscient creator of this universe and beyond. There are religions with multi deity systems of belief as well like Hinduism. Religious belief also holds that from time to time God sends his messengers on this planet to save us mortals like Mohammed, the Prophet, Jesus, Buddha.

Culture is not based on any belief. It is not a belief at all. It is rather a product of communities practices and common habits.

Religious beliefs are confirmed towards the beginning of any religion and those beliefs hardly ever change. All the religious beliefs of Christianity, Hinduism are still the same as they were thousands of years ago. Religious books written during the inception of these religions make sure these beliefs are maintained through the ages.

Culture is evolutionary, it’s changing. As time goes on society changes, new ideas and practices are integrated into the society’s matrix. Therefore, culture is not stationary or fixed. It changes with time and with human evolution.

Do you know? Cross vs Crucifix