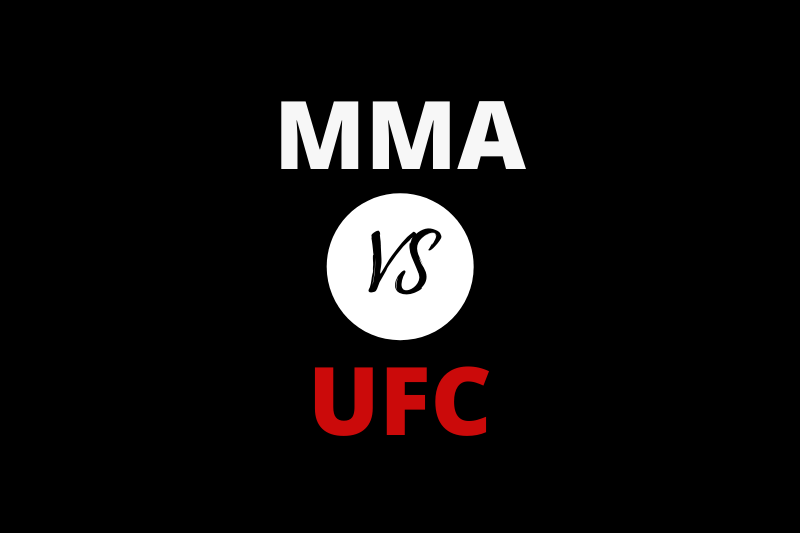 Before we talk about MMA vs UFC, let’s find out what are these anyway.

UFC has become synonymous with MMA but there are many differences between the two. When someone brings up MMA in a conversation, your mind is instantly directed to UFC. MMA and UFC are two of the most popular talking points. These might belong to the same category, but there are major differences between them. MMA stands for Mixed Martial Art and UFC stands for Ultimate Fighting Championship. The former is a sport and the latter is an organization.

UFC is an institution that organizes the sport called MMA. There are different sets of rules for MMA and UFC as well. MMA is considered to be one of the most-watched combat sports. Even though it has been existing for hundreds of years, MMA has gained a lot of prominence over the past few years. It is a full-contact sport in which both wrestling and striking are allowed.

Since the 1980s, Mixed Martial Arts have been in practice throughout Japan and Europe. It became popular only after the formation of the UFC. The name ‘Mixed Martial Arts’ was coined by the former Greco-roman Olympic gold medalist, Jeff Blatnick. A specific style of sport is called MMA. The competition based on this sport takes place at the UFC.

MMA is a full-contact sport that involves fighting when you’re standing or when you’re on the ground. The player can use moves involving wrestling and striking. In ancient times, it was practiced in Greece and among the Romans. It is a combat sport where both the competitors try to achieve dominance over one another. The players generally use three tactics such as finishing holds, striking, and control. The rule allows the player to use multiple techniques of martial art such as kicks, joint locks, and takedowns. Whoever knocks out the other player wins the game.

No one exactly knows the exact history behind the start of MMA. One of the earliest fights had taken place in 1976. Muhammad Ali, one of the best boxers, fought in a fight with mixed rules. He was fighting against a professional Japanese wrestler named Antonio Inoki.

It was a terrible fight since the fight was fixed at the last minute. Ali didn’t know anything about wrestling and Inoki didn’t know how to box. Inoki tried to drag Ali to the ground for some wrestling while Ali was trying to stand so he could box with him. The fight led to a draw and it helped to lay down the rules of MMA.

Do you know? Difference Between Articles of Confederation and Constitution

The Ultimate Fighting Championship or UFC was founded in 1993. Credit for its formation goes to Art Davie, Robert Meyrowitz, and Rorion Gracie. Its headquarters are located in Las Vegas. UFC has helped to make the sport of MMA popular. Because of this organization, MMA has reached a point of importance and popularity.

The Ultimate Fighting Championship is a popular Mixed Martial Art organization. It showcases the fights of the best martial art fighters. The modern name given to the UFC game series is EA Sports UFC3. The standard UFC fights consist of five-minute rounds.

The fights can be extended from the rounds. The referee can stop the fight under three conditions: if one of the players taps out due to submission. If the player is knocked out or the player is no longer defending himself. UFC is considered to be one of the biggest stages to host MMA fights. The organization holds eight different weight classes.

There are different rules for UFC as well. In Japanese MMA organizations, it is allowed to kick the opponent’s head even when the individual is on the ground. But this is considered illegal in the UFC. For the same reason, fighters like Greg Hardy have been disqualified.

The beginnings of UFC are somewhat similar to MMA. Skilled fighters from different martial arts backgrounds, like boxing, karate, and wrestling, fought each other to see which one was the best. UFC was advertised and marketed as one of the extremely brutal sports where anything can happen. There were three main rules: no eye-gouging, no biting, and no striking on the groin.

In the early days of MMA, there were no such things called rounds. The battle would continue until one of these things happened: a player gets knocked out, tapped out or one of the team throws in the towel. This level of extremeness made many individuals turn away from it. After UFC was taken up by Dana White and his associates, things took a better turn.

Do you know? Scythe vs Sickle

MMA was previously not very popular. With the formation of the UFC, the credit for the popularity of MMA goes to the organization.

Earlier MMA used to be practiced in Japan and Europe during the 90s. On the other side, UFC built its headquarters in the city of Las Vegas.

Mixed Martial Art can be traced back to the 1900s. It was popular around the regions of Japan, Europe, and the Pacific Rim. UFC was founded in 1993 by Art Davie, Rorion Gracie, and Robert Meyrowitz.

Mixed Martial Art is a combination of multiple styles or schools of fighting. On the other hand, the Ultimate Fighting Championship helps to promote this sport across the world.

It is very different to point out differences between the two as both belong to the same category. UFC acts as the brand name to sell the ideas of MMA.

Do you know? Difference Between East Egg vs West Egg