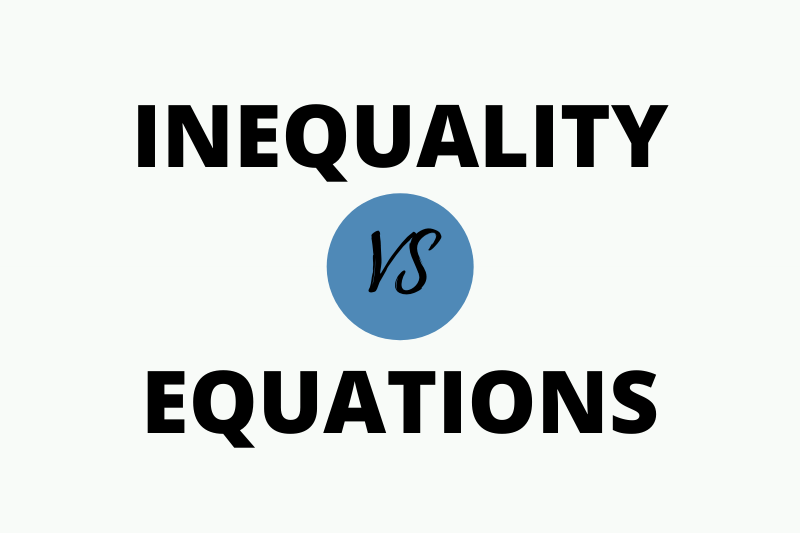 In this article, we will tackle the often asked question of Inequality vs Equations.

Mathematics is a branch of science. Science as a discipline deals with solutions and answers to various real-life problems with the ultimate goal of understanding the reality we live in.

Physics deals with the physical phenomenon, chemistry with the molecular workings of the world, biology with the organic, living world but mathematics is a kind of subject that transcends boundaries.

Everything can be explained with the help of mathematics. From the charge of an electron to the trajectory of a comet, to the age of the universe.

Algebra works in the following way:

This is a quadratic equation: ax^2+bx+c=0; where a, b, and c can stand for any number (a cannot be zero), and a given equation can be used to determine the value of x (unknown quantity) which would satisfy the equation.

The difference between inequality and equations is that inequality, as a symbol, is used to represent unequal relation between variables whereas equation (with its equal to sign) is used to mathematically represent equality between the variables being used.

Inequality in simple English means not equal, that there is an imbalance between the two values or entities concerned where one is greater than the other. This condition, in mathematics, is represented by two symbols <( lesser than) and > (greater than), for example (10+12)>20.

It is clear from the example that inequality represents the order of values between the variables. Therefore, it is also symbolically used to compare the variables used.

A linear inequality expression has a number of solutions. Inequality in mathematics can be of two types: simple inequality and compound inequality. Both these types have different sets of rules unique to them to get a solution.

Equations are another form of algebraic expression. It is an expression that is used to symbolize the equal relationship between the set of variables in question. The symbol used to identify an equation is = ( the equal to symbol).

An equation is made of a number of variables and is mainly used in determining the value of an unknown variable.

An example of an equation would be, 2x+5=30, where 2x+5 and 30 are both algebraic expressions separated by = sign, signifying that the value on both sides of the equal sign is equal or the same.

This whole expression together is called an equation. From the above given example, the value of the unknown variable x can be determined. Equations have different types, like a linear equation, simultaneous equation and quadratic equation, differential equation, exponential equation.

The solution to an algebraic equation is the process of finding the value of the variable which when written in place of the variable in the equation would satisfy the original equation. Equations are used in various physics problems as well.

Do you know? Alpha Kappa Alpha vs Delta Sigma Theta

Difference Between Inequality and Equations

An equation is an expression used to signify equality between the variables used in the expression. It is used to determine the value of the unknown variable, which when placed in the original equation would amount to the value on the other side of the equation and satisfy the said equation.

Both inequality and equations are algebraic mathematical expressions. Therefore, they are represented through symbols.

The symbol for inequality is < ( lesser than) and > (greater than) symbols. These symbols quite effectively represent the comparative value of the variables used.

The symbol which is used to denote two or more variables as equal is = (equal to sign).

A problem of inequality may have an infinite number of plausible solutions.
Equations usually have unique and fixed answers for a solution.

An example of an equation is 2x+y=c, where the value of 2x+y is equal to c.

Do you know? Thumb Drive vs Flash Drive