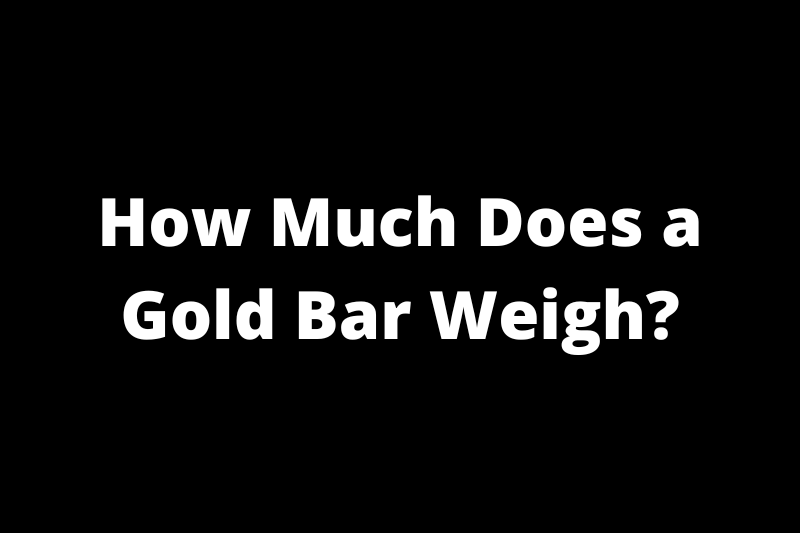 The mere mention of the word ‘Gold’ conjures up an image of glittering gold jewelry, coins, and bars! Everyone knows gold is one of the most very precious metals in the world. It is used for making ornaments, coins, and bricks, and also for industrial purposes. Gold is also considered a long-term store of value. Today, we will learn how much a gold bar weighs.

How Much Does a Gold Bar Weigh? The standard weight of a Good Delivery Gold bar is 12.4 kilograms

How heavy is Gold?

It is also measured in units of troy ounces. The value of one troy is equivalent to 31.1 grams, or 0.07 pounds. When one compares the weight of gold with other metals, it is considerably high and this is because the density of the metal is higher than the rest!

It is estimated to be 19.32 grams per cubic centimeter. The heaviness of each atom is responsible for the higher density and hence the weight of the metal. You will probably not feel the weight of gold flake on your palm. The weight is pretty much considerable when you consider the price of a coin or jewelry made of gold and purchase it by weight!

What is the Weight of a Gold Brick?

The weight of the gold brick depends on the size of the brick and also the density! For example, if you fill a mold up to the brim with liquid gold and the other that is half-filled looks the same but weighs differently.

Also read: How Big is a Polar Bear Compared To a Human?

Gold has served as a hedge against inflation for many decades now. It protects against the devaluation of paper currencies that are not backed by gold. For this reason, people invest a part of their money in buying various forms of gold like jewelry, coins, biscuits, and bars.

Many people also believe that the collapse of the economic system of the world that runs on paper currencies is imminent and at that time only metals like gold and silver which have intrinsic value will be of any use.

Gold bricks are gold bars that are made inside a mold which gives them a distinguished shape.

Minted bars and cast bars are the two most common types of gold bars that are manufactured!

The pricing and the overall appearance distinguish the two:

Cast brick is also called molded brick and it is made by liquid gold being poured inside the mold. This process is as old as 6000 years and has been used to make gold since ancient times. Over the years, alternative casting processes have been found.

In the traditional system, a crucible is used to melt the gold into its liquid form. Then a mold is chosen based on the dimension you like and it is cast into that space. The smelter is removed from the gold after it solidifies. The bricks are engraved or stamped sometimes to show the name of the manufacturer.

Under the modern method, a smaller cast is used for making 1 kilogram and less weighted bars. Refined gold of proper purity is used either in granular or small pieces. It is then placed inside a mold which is weighted to get the desired value. Then it melted down.

Mostly the shape of the bricks is rectangular although it may vary. Rod, round or square shapes are also available in the market. They are simpler and cheaper in the price unlike the latter. They are even more authentic and original given the process of formation.

They are much smoother and cleaner than the cast gold bars. Since the time and process of manufacture is more intricate the price of the minted gold bars is even more. However, this is the most common type that we are accustomed to seeing. One can opt for more detailing of the designs and the patterns are more intricate on minted gold bars making them even more expensive and pricey!

In order to make minted bars, you have to begin with making cast bars! Then as they are compressed by a machine they become even smoother. Continuous casting machines are used for making regular bars which are then shaped into the desired sizes.

Weight, width and thickness, and several other factors are taken into account for the construction of the casts. It is placed in a furnace to increase the malleability of the mold. It is then finally polished and cleaned to give it the desired form and shape.

How much is the gold bar worth?

Gold bars are worth a lot and according to the price of the market, the price and the weight of gold bars keep varying. Gold bars usually consist of 24-karat gold, which is made of pure gold up to the core.

Also read: How Much Does a Car Battery Weigh? [Size & Weight of 12 V Car Batteries]

This is a large gold or silver bar which is used in London, New York, Tokyo, etc. It is also used by governments as gold reserves, they are typically flattened and pyramid shaped. They are 8 and 11 inches long at the top and 2 and 3 inches wide at the top, and 1 to 2 inches tall.

Smaller than good delivery bars, they are mainly used for investments. They are flat in shape, the kilobars are 1 kilogram or 1,000 grams in weight, which equals just over 32 troy ounces.

Gram bars are popular in Asia and although they are found in many shapes, the weights are mainly maintained as 10, 100, or 1,000 grams.

Originally used in Troyes, France, the troy ounces are units in which gold bars are sold. It is a standard unit for measuring gold in European and American markets.