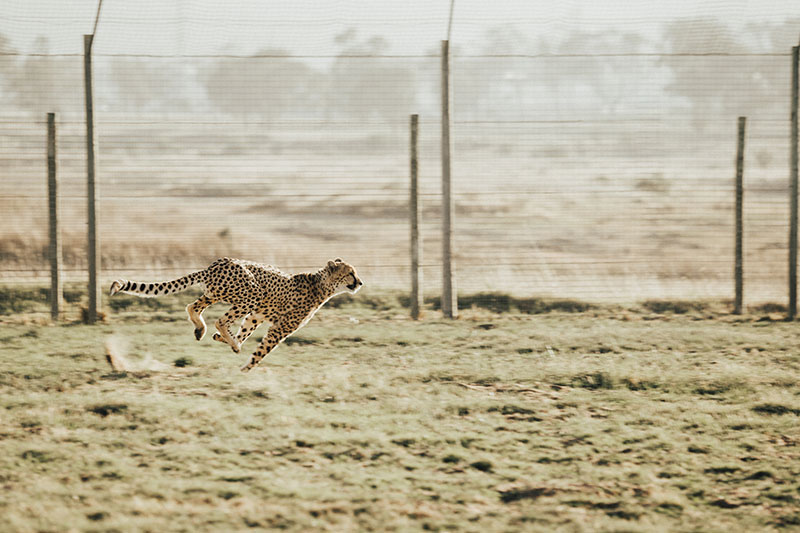 A Cheetah is famous for its speed. They can run and chase at a speed of 120 kph. The cheetah attains an acceleration of 0-100 km/h in just three seconds and that is incredible. They attain the desired speed in a very short while. They are well known for their incredible speed and there is no parallel to the species of a cheetah.

You will be amazed to know that the acceleration of a cheetah is more than that of a Ferrari or a Porsche. The number of cheetahs however has declined over the years and it is truly wondering what the future holds for them.

How Fast Can a Cheetah Run?

What is Cheetah’s Top Speed Recorded?

What is the Distance Covered in one minute by a Cheetah?

A cheetah takes about thirty seconds to reach its maximum spread and within a minute it might have covered a distance of as much as one kilometer. Although at most times it is around 700 to 800 meters. Eight meters in a single stride is what they cover and none of their paws touch the ground. They swiftly glide on the surface of the savannah and that is a sight to visit on the television screen.

Interesting Facts about the Cheetah

It is to be noted that the speed an adult cheetah can run is about 120 kph. It is stated by zoologists that the slender body structure of the cheetah and the smooth twitching muscles enables them to attain such a high speed. The rate of acceleration of the animal is 10 meters per second squared.

At a rate of three strides, they advance at a rate of 60 mph. That is rather an information that takes some time to sink in! Reaching a speed of as much as 60 mph in just three to five seconds is phenomenal. Now the question arises how much distance can it travel in one minute? This is a rather an interesting topic that we shall discuss here.

More Fun Games: How Big is a Polar Bear Compared To a Human?

What is the maximum time for which the cheetah can chase at that speed?

A cheetah can maintain a high speed for about thirty seconds. During those thirty seconds, he continues to run at that speed to catch the prey.

How Does a Cheetah Run So Fast?

The speed of a cheetah is its specialty. The cat weighs around 60 kilograms. The adult male kind has this weight which is much less than any other wild cat that survives in the savannah. The slender figure and the lightweight of the cheetah are responsible for the cat to glide along smoothly as if it was flying.

The simple concept of aerodynamics explains that the cat minimizes air resistance such that it can easily move faster without any hindrance in its path. This is because the head of the cat is very small.

The slender body is also a reason for minimum resistance. The fat on their body is the least and the rib cage is also flattened. The shape of the body of the cheetah can be compared to the structure of the greyhound.

However, these cats due to their small heads have comparatively weaker jaws and smaller teeth. This results in the fact that they are unable to aim for larger prey.

They also cannot combat other predators and as a result, they consume animals scavenged by lions and hyenas.

A fast runner needs well-developed and strong legs to sprint. These cheetahs have spindly legs that enable them to take leaps easily. The strength-to-weight ratio is also high and as a result, they are incredible at chasing. These cats also have the benefits of Fast-twitch muscles. This helps them to gain great acceleration and cover a distance of six to seven meters in a single stride.

Another thing that must be noted is the fact that they have a gait similar to that of a galloping horse. Their paws come off the ground all at once and together. You shall be amazed to know that the cheetah makes three six-meter strides… every single second!

The flexible spines are a blessing to the cheetahs. It seems that the entire length of the spine is covered by elastic. They quickly extend and are tensile allowing the cheetah to swing their legs over a longer distance.

They lightly touch the ground while sprinting which allows them to accelerate continuously. This is possible because of the ridged footpads and the non-retractable ones. This maximizes the traction in Savannah.

How does a Cheetah Maintain Balance?

Some factors come into play when you are determining the skills of balancing.

The size of the tail is about 1.2 meters and it is the tail used in cheetahs that are used. as a balancing organ. Almost half the length of their body is made of the tail which is moved side to side to attain speed and maintain balance. The entire weight of the body can be put forward without causing them to topple over.

In absence of the tail, the cheetah can still run at such speed but the chances are it will easily topple over and crash. This is similar to the situation of the sports car without a proper steering wheel.

Cheetahs rather have an oversized heart that pumps blood at a very high rate when the animal needs to chase their prey. A vast amount of blood needs to be supplied to the muscles so they do not get fatigued and the heart has a fantastic capacity to manage the transition from resting to a sprinting stage.

Inflated nostrils and relatively large lungs enable the cheetah to gulp in more oxygen at a time. As a result, their blood is oxygen-rich and the energy and speed of the cat are enhanced.

However, there is a problem that cats face due to an increase in the size of the heart and the lungs. Such an acceleration in heart rate is impossible to maintain, and the spotted cat can quickly overheat and become winded.

30 seconds is all that they can afford and run at such speed puts them close to the chance of brain damage as we know Savannah is rather a dangerous place for an exhausted animal.

How is speed useful for a cheetah?

Although the savannah region is an open space, the cheetah must catch its prey within a distance of 700-1000 meters. Let us tell you what happens when the cheetah spots its prey

The cat dips its neck inside the grasses with accurate precision such that even from inside a safari truck it becomes difficult for you to spot them.

If a group of antelope is grazing then you can sense the fear in them but no one knows where the cheetah is hiding or going to appear from.  The cheetah reaches a few strides away from the herd such that when it features from the grass it can easily pounce on the prey.

This is a scenario when apparently the cheetah is nowhere to be spotted and the antelope is grazing happily when out of nowhere there is massive dust scattered and there is a chase. The antelope changes its direction in a zigzag pattern continuously to gain an advantage over the speed of the cat but the amazing capacity of the tail of the cheetah to steer hardly gives such an opportunity to the prey.

Finally, it is not possible for you to see that cheetah killing its prey because as soon as the cheetah uses its speed it is impossible for your jeep to catch up. But you can get a glimpse of the immediate kill. Unlike lions and tigers which pounce from behind on the back of the prey and bite its neck, a cheetah cannot do that as jumping on someone’s back at a speed of 113 kph may be risky for them itself. They instead trip their prey and for that, they get only about one to two chances. Once the antelope falls the cheetah jumps on its back and kills it. Now that it is exhausted it eats the food but the job isn’t done yet.

Since they are already tired from the chase, it is impossible for them to eat their food right away. They have to hide the flesh from the larger cats and scavengers. They will carry their food into the high grass instead.

How Did Cheetahs Evolve as the Fastest Runners of the World?

Cheetahs evolved and dominated the vast plains of Savannah, the grassland region, and as we know that although there is enough space to run around there is a limited cover for both the prey and predators. They were earlier found in parts of Africa and Iran. As a result, the cheetahs had to learn the techniques of surviving and catching prey in these vast regions.

The most common preys of a cheetah are Impala, Thomson’s gazelle, and wildebeest calf. The young and the sick antelopes are also targeted by the cats. They choose lightweight and agile preys which graze in herds on the grasses away from the trees. The cheetahs use their skills of running to catch prey easily.

Now if you are not a zoologist or a wildlife enthusiast then it will be difficult for you to distinguish between a cheetah and a leopard on a safari. Since they are never seen side by side you will find it hard to tell the difference. The leopards rest on the trees and the cheetahs in the grasses.

Here are some key points to distinguish between the two-

How are Cheetahs Captured?

Now a question arises who captures and captives the fastest-running animal into a cage? It is sad that we have to see these animals in the zoo because almost 91 percent of the cheetah population has perished other wise no one would have preferred to keep these animals captive in constricted places, wild cats that are meant to run in the free and open spaces.

Is the Speed of Cheetahs Detrimental to the Animal itself?

The cheetahs are suffering major extinction threats because of habitat loss and habitat fragmentation. They are a classic example of over-specialization. The increased speed for the sole reason of catching prey is unfortunately not helping them to survive in the changing environment.

With the vast areas disappearing it is becoming difficult for cheetahs to catch prey. For instance, a lion still shows great strength in an enclosed area to catch prey but a cheetah will not be successful under such a circumstance because in absence of space it will not be able to use the quality of speed to outrun the prey and it does not even have much strength to defeat a bulky prey.

Where do you find Cheetahs in the Wild?

Cheetahs are widely spotted in the region of The Serengeti. Masai Mara along with Kenya and Tanzania is popular for spotting the cheetah population. The region of Zambia in the Liuwa Plain National Park and Botswana’s Central Kalahari or Okavango Delta are regions where cheetah concentrations are observed. Unfortunately, only less than 7000 individuals remain of the species and they are highly endangered. You must go and see them in Africa before they completely disappear.

Hence we noted that cheetahs are the fastest animals in the world and their numbers are decreasing at a rapid rate. Attaining a speed of 60 mph in just a few strides is only possible by this animal however their disappearance is a loss of the Savannah’s.