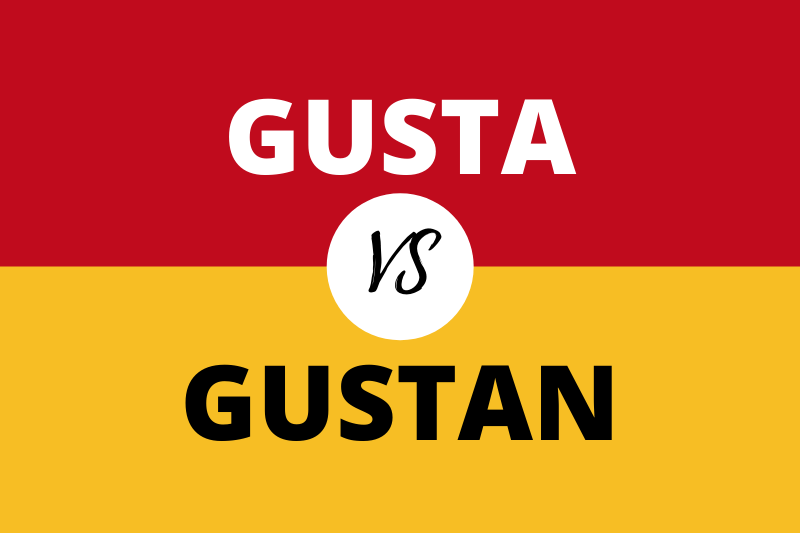 Spanish is one of the widely spoken Romance languages. The Spanish language developed from Vulgar Latin. It was brought to the Iberian Peninsula by the Romans. Even though Spanish is an interesting and important language, people with a different native language find the usage of verbs quite confusing. For example, words like Gusta and Gustan are the verb forms of the word Gustar. Continue reading to learn the Gusta vs Gustan.

In Spanish, the verb Gustar means ‘like’ in English. ‘Me gusta’ means I like, ‘le gusta’ means they like, etc. In this way, the verb gusta is used in several ways. It is used to refer to the liking of he, you, they, me, etc.

Gustan on the other hand is used when the noun is plural. When one is said to like cars, books, houses, etc, the verb Gustan is preferred over Gusta.

In Spanish, Gusta is a verb. The word Gusta means ‘to like’ in English translation. It is formed from the main Spanish verb ‘Gustar’. This verb is used only when the subject of the sentence is in the singular form. Only when there is one subject in the sentence, can this verb be used.

Let’s look at some of these examples:

1) Spanish: Me gusta esta flor
English:  I like this flower.

2) Spanish: Me gusta Este libro
English: I like this book.

Let us look at some more examples for a better understanding:

2) Spanish: Me gusta ese pez
Me: indirect object, pez: main subject.
English: I like that fish.

Based on the first example, the verb gusta is used even when the indirect object (we) is plural in form. Keeping in mind the singularity of the main subject (the book), gusta is used in the sentence.

In the second example, gusta is used in the presence of the indirect object as well as the main object, both of which are singular.

The verb gusta is not dependent on the pronouns of the sentence either. As long as the subject is a single object, gusta can be used with pronouns such as me, te, nos (I, you, we), etc.

Just like Gusta, Gustan is a verb derived from the Spanish verb Gustar. It means ‘to like’ in English translation. When the subject in the sentence is plural, i.e. it is more than one object, Gustan is used.

Let us look at some of the examples:

1) Spanish: Me gustan estas flores
English: I like these flowers.

2) Spanish: Me gustan estos libros
English: I like these books.

1) Spanish: Me gustan esos bolígrafos
Me: indirect object, bolígrafos: main subject
English: I like those pens.

In the examples stated above, the first one has a single person as the indirect object. It also has the pens in a plural form which makes it suitable for the use of Gustan.

Gustan is not dependent on the pronouns of a sentence. For example, just like it was mentioned in gusta, gustan is also used for me, te, nos (i, you, we), if the subject is in plural form, i.e there is more than one object present in the sentence.

Difference Between Gusta and Gustan

Both Gusta and Gustan are Spanish verbs. These have originated from the main verb Gustar.

Neither Gusta nor Gustan is dependent on the indirect object.

Both the terms gusta and gustan are not dependent on the pronouns used in a sentence.

Both these words are said to mean ‘to like’. But in Spanish, it is translated to ‘pleasing to’. This adds a positive effect to the sentence as well.

Twix lovers have made various observations and assumptions over the years that have not been Gustan and Gusta are a part of the main verb ‘Gustar’. The verbs are not dependent on the indirect subject or the pronouns of a sentence. The use of the verbs is dependent on the main subject of a sentence. Spanish is such a beautiful language to learn, their culture and cuisine are worth exploring too.