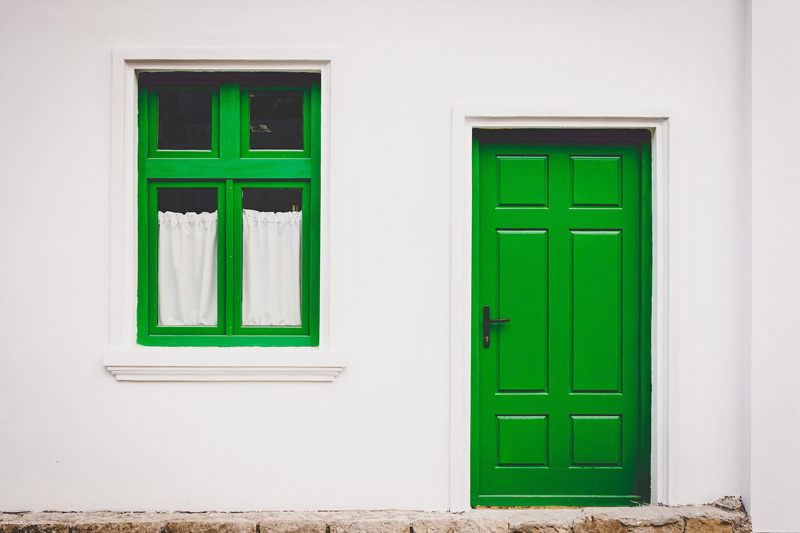 Usually played as a thinking game (riddle), the ‘Green Glass Door’ game is also a great party game or an icebreaker.

The game can be used in a wide range of settings such as classrooms, training workshops, fire camps, and parties.

A minimum number of three players required to play this fun party game. Using their reasoning, logical thinking, and problem-solving skills players must try to guess how they can get past the green glass door. Knowing the rules and objectives of the game will help the players go further in the game.

It is essential that the player starting the game should be aware of the secret.

Nothing. Only players willing to have a great time are needed! This game is best suited for a medium to a large group. It is an excellent choice as a group activity.

At the beginning of the game, let players know that their objective is to get objects past an (imaginary) green glass door.

Other examples could be, “I can bring a kitten through the glass door but not a cat.”

Have you guessed why?

Did you get the secret? Think harder….!

Still didn’t get it?

Never mind, we will get to the secret part later, 😉

The next player in the circle must try to figure out what it is about the object that allows it to be passed through the door. If a player puts forward an object that has double letters, they are met with the reply, “Yes, you may.”

If it is an object that cannot pass through the green glass door, the player is met with a consequence. They will get the reply, “You may not take that through the Green Glass Door, you may _______.

I prefer dare as it adds more fun to the game.

If a player believes that they have found out the combination that allows objects through the green glass door, they must substantiate their claim.

They can do so by telling the combination and giving an example of an object that can pass through the green glass door.

Any player can make this claim at any point in time throughout the game.

The next player will get the chance and it will continue in a circle. Some players will crack the secret while others will still be clueless.

Players usually think that there is a relationship but that’s not the case (now you know!). It’s not about relationships between the two objects but the spelling.

Suppose, a player starts off with “I can bring boots through the glass door, but no shoes.”.

In the next round also, he would say “I can bring slippers through the glass door, but no sandals.”

The other players may think (wrongly) that it’s about what you wear on your feet whereas all it is about is …wait… we will tell later!

Once, everyone knows the secret (mentioned below), the game stops. You can though carry on making fun of the others who said silly stuff, had to face funny and embarrassing consequences!

The combination that allows people through the glass doors is in the name of the object. The players need to pay attention to the words.

The secret is a small attention to the details which many players will miss at first.

So, now is the time to reveal the million-dollar secret!

Not yet… I will give you another chance because once you know the glass door game rule, you’ll feel so stupid for having it guesses earlier!

You don’t have to be too hard on yourself. The green glass door game is a riddle and riddles are meant to fox us.

This game is quite a good source of clean fun and entertainment because most players in the party or a group are unable to guess the secret for a long time.

The rule/secret is that there must be double letters, either vowels or consonant sounds. The players are unaware of this. Only one player knows the secret.

Once, you know the secret you’re supposed to keep it with yourself and not yell it aloud! Play along and enjoy other players guess, make mistakes and do silly dares.

Children especially enjoy this game a lot because they say the darndest things because of their over-creative brains. In my classroom, I play this game with my students as an icebreaker and it has never failed to make all of us giggle and bond with each other.

This game can be played during picnics or school bonfire camps.

If most players are familiar with the traditional combination or players want to play another round of the game, facilitators can make variations to the game. Some variations are listed below:

Such variations keep the game fun and challenging.

Younger players are familiar with the traditional form of this game. Therefore, the variations in combinations will make the game more interesting.

Adding variations to the objects, the number of objects, and the door can further pique the interest in the game.

More Games for Kids: Mother May I Rules, Instructions & Variations

Even though the green glass door is a well-known game, you’ll always find a majority of the group players unaware of the rules of the game.

Most of the time it is a completely new experience for kids. This riddle engages the youngsters and turns on their puzzle-solving mode. That’s why it is such a great party game and an icebreaker.