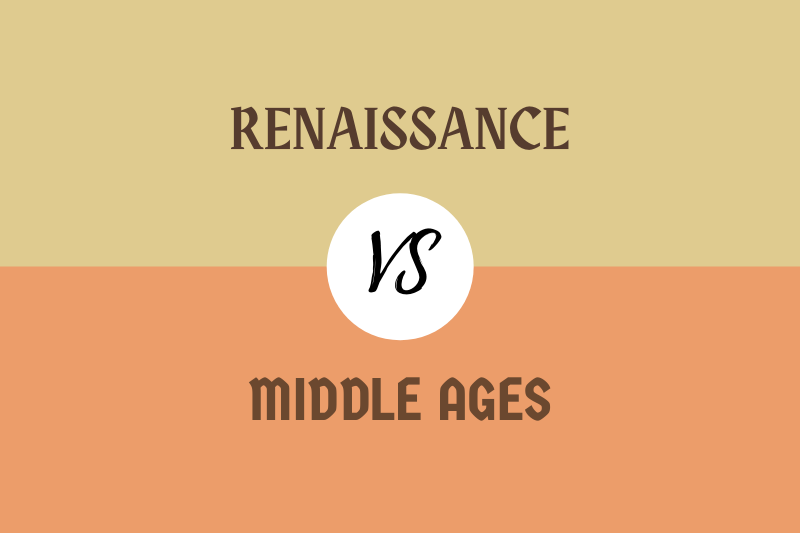 Let’s find the difference between renaissance and middle ages by first understanding what these historical periods were really about.

Renaissance means ‘rebirth’ or ‘reawakening’. By this term, we can understand that the Renaissance period was composed of slumber or stillness. This characteristic was described by the scholars of the Middle Age period. Renaissance was a cultural movement that had taken place between the late 13th and the early 17th century.

The movement started in Italy, then spread to the rest of the world. This period led to an increased interest in Classical values.

The Middle Age was also known as the Dark Age. It began in the 5th century and continued till the 16th century. The beginning of the Middle Age period had led to the decline of the Western Roman Empire whereas the end of the period blended with the Age of Discovery and the Renaissance period.

Renaissance was a cultural movement that took place immediately after the end of middle age. The middle-age acted as the driving force for this movement. The movement had the central idea of rebirth or reawakening of entire Europe. This change was necessary so that Europe can be shown as the light of the modern era.

The origin of the term Renaissance was related to French. The term Renaissance means rebirth. This term was first used in the 18th century which was 4 years after the movement had started. The word was publicized by Jules Michelet who was a French historian. Use the term in the book Histoire De France (A History of France). It was published in 1855.

The Renaissance movement had led to a new interest in the sphere of learning. The values of classical antiquity were of high interest even though the medieval period was characterized by an era of stagnation and darkness. The movement had originated in Italy. Later on, it spread to The Western and the central parts of Europe between the late 13th and the early seventeenth century. The beginning of a modern era in Europe. It was a complete process where the culmination of the enlightenment movement took place.

It was considered to be a vast movement with multiple features. The characteristic features of the movement are as follows:

About The Middle Age

The middle age refers to the time period in European history when the fall of the Western Roman Empire took place. It is normally called the middle ages because this time period falls in the middle of classical antiquity and the modern Renaissance period. The middle-age period was divided into three phases namely only, high, and late middle age.

Some of the important characteristics of this period were the decline in population, change in the economic situation, and changes in the size and prominence of the cities. It was considered to be a part of great uncertainties as the barbarians started to migrate to the ruined western Roman empire. This had led to the growth of new kingdoms.

The second phase led to the rise of some of the greatest rulers of the Middle Ages. But soon these invasions led to the restructuring of medieval society. The last phase of the medieval age was known as the hai since it experienced a lot of changes in economic and cultural prosperity. The life of the people was marked with tricked rituals, customs, and conventions along with high obedience towards the King and the Pope.

Difference Between Renaissance and Middle Ages

Renaissance is a cultural and intellectual movement. The Middle Age period was a part of European history.

It took place between the late 13th to early 17th centuries. It started between the 5th century and the 16th century.