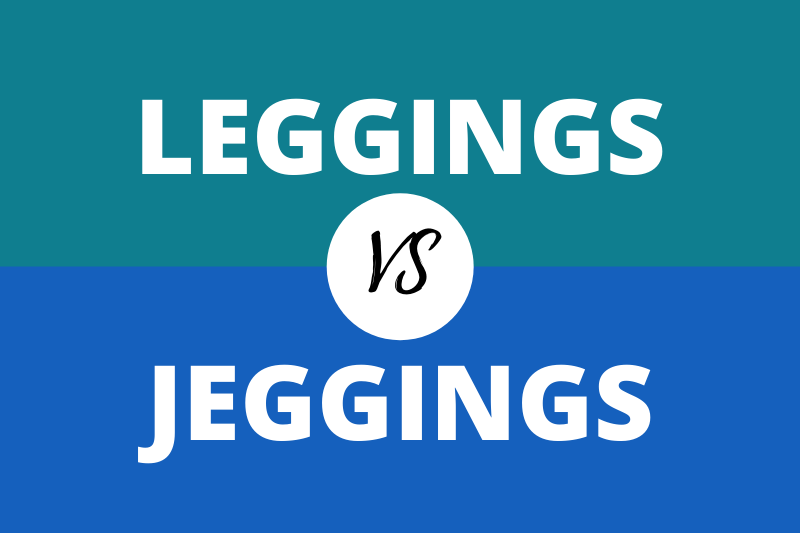 While we all love decking up in our very best attire from time to time for those special occasions, for day-to-day life, however, almost all of us seek comfort. I mean, nobody really wants to wear a ball gown to the local bazaar, right? But in the age of “the gram” (Instagram) looking more than a bit put together is imperative.

Both leggings and jeggings fit the sweet spot where they are comfortable yet fit to pair with a bunch of other pieces to make a statement. But because of how similar they sound, there is only a difference of a letter here, they are considered to be one and the same.

The fact that they are both trousers doesn’t seem to help matters. Despite all these similarities, they are not the same. Otherwise, they would have been called the same. So, where does the difference lie?

Leggings are skin-hugging, usually high-rise, ankle-length trousers for women. Before they made their way into streetwear or into daily fashion, they were mostly used by dancers and athletes.

These, also known as tights or bicycle and running tights, were made of nylon-lycra ( usually, 90% nylon and 10% lycra). In the 1960s, for the first time, they became particularly popular and from there on it was on its way to becoming a closet staple of millions of women.

In the 1970s and 80s, aerobics as a form of exercise became popular and the most fashionable thing to sweat out was these leggings. Not only were they great for workouts, but they also gave that ballerina-like elegant look with ballerina pumps and the write top wear.

This propelled leggings into the arena of streetwear. Later, they became a prominent part of the athleisure trend of the late 2010s. These leggings, which became fashion items were usually made of cotton, cotton-lycra, cotton-lycra-nylon, etc.

With the addition of cotton, they became more comfortable to wear. When they were at the height of their fashion days, these leggings would be found in all kinds of prints and colors. But the ones that stayed are the ones with solid colors like black, navy blue, gray, and such. Probably because of their versatile nature.

Jeggings as a term is a blend of two words jeans and leggings. As the term suggests it’s a legging that is made to look like jeans, more particularly skinny fit jeans. The purpose of a trouser which looks like jeans but isn’t in that it is not made of the same material is comfort.

Even though denim jeans are a holy word in fashion, they can be uncomfortably tight with no breathing space, especially the older ones before jeggings became a trend.

The advantage of jeggings, therefore, lies in their elasticity and hence comfort. It gives the feel of leggings while looking like jeans. It is a clever piece of clothing indeed.

There are two types of jeggings in terms of material: one is with leggings material, a knit, basically a legging which looks like jeans. The next one is a cross between denim and legging material, which uses denim fabric but retains the elasticity by adding more spandex.

Sometimes, jeggings will have a faux or real zipper and belt loops giving it an authentic jeans look while others are with elastic belts without any zipper or belt loops.

Do you know? Difference Between Louis Vuitton and Louboutin

Difference Between Leggings and Jeggings

Leggings were inspired by skin tights worn for ballet practice and so they emulate that look in their street fashion version too. Jeggings on the other hand look like skinny jeans which was the main purpose behind their manufacture.

Leggings are made of cotton jersey material. Jeggings, on the other hand, are made of knit polyester with spandex. Both of them are comfortable to wear however, jeggings are a bit thicker to create the illusion of being denim jeans.

Leggings are easy to print and so are available in a variety of colors and prints. Jeggings are made to create the illusion of skinny jeans so they mainly come in denim blue or black color.

Leggings are very comfortable to wear for long hours and to even work out in. Jeggings though are very no doubt isn’t made for work out, they are more of a fashion item.

Do you know? Difference Between Step Cut and Layer Cut (With Table)

Leggings are worn with an oversized t-shirt or sweatshirt and keds or sneakers and this look is very popular with college-going adults. This is an easy, comfortable look that makes one look just enough put together.

Some prefer wearing these skin-hugging tights under mini skirts too for a more preppy look. Leggings are versatile enough that they can look good in both athleisure wear and something more elegant.

Jeggings became popular because jeans were uncomfortable to wear with their rougher, thicker material. This was a savior to those who wanted the figure-hugging look of skinny jeans but without the discomfort and scratchy feeling.

Jegging is usually styled as skinny jeans would. They are known to create the hallmark casual look but can be amped up to office wear with the right blazer and shirt.

Jeggings are so versatile and chic that they outlived their trendy years to become a staple of women’s closets.