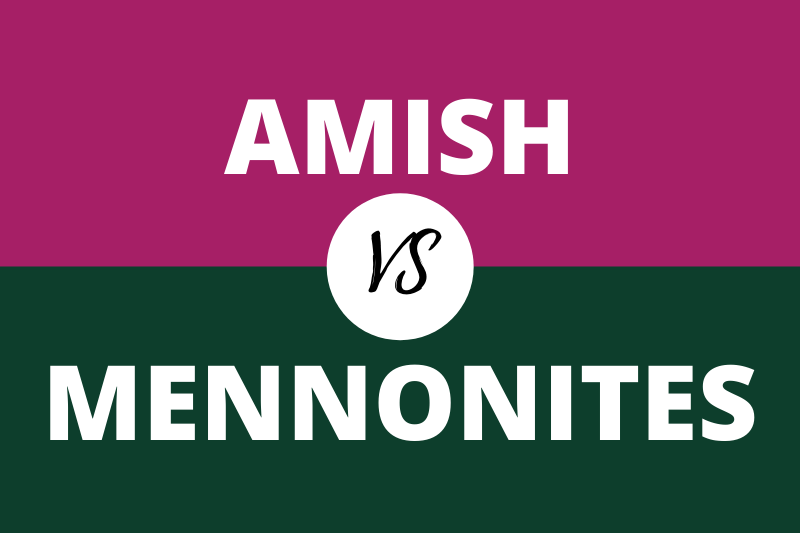 Many people get confused between Amish and Mennonites. In this article, we will explain Amish vs Mennonites.

Religious diversity can be found all over the world. But most religions stem from the same faith and beliefs. Almost every religion in this world talks about a certain belief system and different practices which are to be followed in order to bring positivity and discipline to a person’s life.

Similarities between such religions do exist but the differences between them are also easy to notice. Such diversification is very prominent and visible in parts of Europe.

Two such Christian groups are Amish and Mennonite. The roots of the two are the same but they got divided and changed with the course of time, and developed different systems of belief. Both Amish and Mennonites are a part of the Anabaptists group, whose practices are retrieved from the Bible. Their belief system was in the simplicity of faith and this base is still followed by them.

The main difference between the two groups is that the Amish group was founded by Jakob Ammann. He strongly believed that any kind of sin must be met with serious punishment. This ideology or concept attracted many followers.

On the other hand, the same old followers of peaceful practices of Anabaptists formed another group, named Mennonites.

Amish follow a traditional lifestyle and very strict practices Anabaptists. If any person doesn’t follow the laid rules of religion and lies, they are shunned from the Amish community. They do not interact with people from the rest of the world and do not believe in adaptation to modern technology. They wear very plain and traditional clothes and travel only through scooters or buggies, i.e. a horse-drawn vehicle.

Mennonites, on the other hand, are a non-violent group of Anabaptists. They are flexible in nature and readily embrace and adopt modern technology in their daily life. They are more involved in missionary work that helps deprived people and spread their faiths and beliefs all across the world.

Amish is a North American Christian group, that formerly belonged to the Anabaptists group. Jakob Ammann was the founder of the Amish group in the late 17th century. He was a reluctant and strong believer in non-resistance. He sturdily followed social shunning of people who are involved in wrongdoings or who did not follow the laid rules of religion and lied.

Amish people live in close-knit communities, separating them from the outside world. They follow a very strict and stringent lifestyle and a set of behavior rules, known as Ordnung. They speak in German or the regular dialect of German or Pennsylvania Dutch for communication at church and English for their daily life at home.

Amish wear very plain traditional clothes and are known for their nonconformist lifestyle. Amish men have a full beard without mustaches and the women wear solid-color clothes without any pieces of jewelry.

Amish people do Church services at home only, within the closed community, on a rotational basis. They are strictly against the use of any technology. They use scooters or buggies, i.e. horse-drawn vehicles for transportation.

The Mennonites group was a part of the 16th-century reformation movement, that came out from Anabaptists. It was named after a dutch priest who tried to institutionalize the workings of Anabalist leaders. His name was Frisian Menno Simons.

Mennonists believe in the simplicity of faith and focus on involvement in missionary work that tries to help the poor and deprived, regardless of their section. They are peacemakers who believe in belongingness. They believe that religion and the rest of the world should not be mixed.

Mennonists live as a part of the normal population and not in separate communities. Initially, they used German in the late 16th century but later they adopted the English Language for communication at home as well as in churches.

Mennonists thoroughly follow religious practices and discipline in their life. They follow a simple lifestyle with simple adaptive clothing which has evolved with time. They are involved with the advancement of education, economy, and society as a whole, and are not aloof from the outside modern world.

They also adapt themselves to moderate usage of modern technology in regular life and use automobiles like cars, trains, and buses for transportation.

Difference Between Amish and Mennonites

The founder of Amish is Jakob Ammann. On the other hand, the founder of the Mennonites is Frisian Menno Simons.

The Amish live a very simple life, unlike the Mennonites. On the other hand, Mennonites live a lifestyle similar to the modern-day lifestyle.

The Amish community is prohibited to use Technology. Mennonites can however use technology in their daily life.

the mode of transportation for the Amish is usually a horse-driven vehicle or a scooter. Mennonites use the modern-day automobile for transportation.

Amish men usually have a full beard, unlike the Mennonite men. Amish women usually wear solid color dresses whereas Mennonite women’s shoes are printed or plaid fabric for their dresses.

Followers of Amish follow the non-resistance whereas Mennonites are known as peacemakers who believe in non-violence.

8) The place for Holding of Church Services

All the Church activities of the Amish are held at home. Mennonites hold the services at the church only.

There are different kinds of communities with different faith and belief systems. A lot of history, theology, and beliefs are behind every community like the Amish and Mennonites.